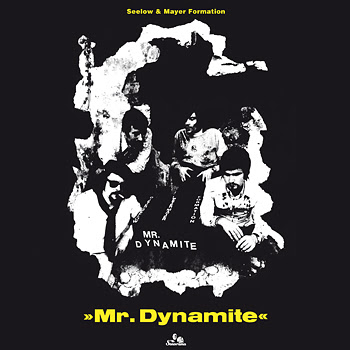 
SEELOW-MAYER-FORMATION This is the first and only German longplay release by four soulful gentlemen from the Stuttgart area, the so called Dieter Seelow & Peter Mayer formation featuring the internationally well known bass player Wolfgang Schmid in his first recording session (later on with Passport, Billy Cobham, ARD TV show  “Superdrumming “...). “Mr. Dynamite” from 1970 is a blend of excellent musicianship with musical knowledge, that became a sought after collector`s item in our times, with original copies changing hands for 250 Euros over the internet, if they rarely show up. The very rare album has been released on the producer`s own label “dk-disc” in an edition of a few hundred copies only and got no re-pressings until  today, 38 years after the music was produced in the famous studio of Horst Jankowski in Stuttgart.

The short lived band by Dieter Seelow and Peter Mayer work together as one, in a style that can be compared to the sounds of Wolfgang Dauner on his “Rischka`s Soul” or “Oimels” albums from the same period, presenting challenging rhythm and harmonics throughout. Their music has a feeling which together is excitingly inventive but clear of idea. The sounds on this album incorporate soul jazz, jazz funk, hard bop, latin music plus the typical psych and kraut rock ingredients of the late 60s & early 70s. Psych rock jazz meets hard bop meets soul beat meets bossa nova rhythm recorded in Germany. A rare mixture, that was truly ahead of its time.

Without the marketing and promotion work from a professional record company, “Mr. Dynamite” remained a rather unnoticed album production back in the 70s, but one that is full of timeless musical feeling, that swings terrifically and has plenty of musical twists or sound surprisings in a contagious mood. The band on this album could play their kind of soul jazz as they wanted, because nobody forced them to make concessions for commercial reasons. The confidence of working together as a unit for some time has brought the group to a cohesive level at the time of recording, aswell as the ability to create their own tunes and moods instead of focussing their activities on traditional jazz standards.

On the first album side, the variations of Peter Mayer`s “Mr. Dynamite” remind us of some weird Euro Jazz soundtrack, mixing hard bop & soul jazz in a combination of acid guitar sounds and basslines, distorted sax grooves and skew-whiff piano chords. The three parts of the album`s main theme vary from lyrical piano passages over heavy funk influenced grooves, marching band style or even a weird citation from the German children song “Hänschenklein”.

Side Two starts with the bossa jazz styled “Swinger From Rio” with heavy latin percussion, that remind the dancers of Dom Um Romao or early Sergio Mendes, while the following tune “Danny`s Walk” is a heavy, organ led soul jazz gem with very cool saxophone sounds in full bloom. These two tracks stand out as irresistible grooves, that got the album a “must have” reputation among the Old School DJs and Rare Groove diggers. Of course Peter Mayer is a pianist who can play a jazz version of any hit convincingly. Therefore their version of “Masquerade” is full of unique tension and a perfect example for the direction, that the Seelow & Mayer Formation was approaching with their few performances in Southern Germany. And the album even closes with one of the loveliest inspirations of the Beatles: The Seelow & Mayer version of “With A Little Help From My Friends” presents a very surprising swing around the popular melody.

Dieter Seelow (* 1939 in Schorndorf) belongs to the most prolific jazz musicians from Southern Germany. His instruments are the Saxophone and the Flute. In the 50s he started with dixieland, swing and mainstream jazz, but got more interested in hard bop and soul jazz during the 60s. After starting his band “Seelow” with bass player Wolfgang Schmid in the 70s, he became one of the forerunners and promoters of jazz rock in Germany. His music has the true spirit of blues and soul and is open to various styles like jazz, rock, afro and latin. Dieter Seelow is merging bop harmonies with soul grooves and influences from modern jazz. Later on he was forced to retire because of health problems and mainly worked in the studio, but returned to the jazz scene after some years and also played as a studio musician in various projects or for movie and tv production. A few years ago he started to play concerts again, mainly with his band “Seelow”. In 1988 Dieter Seelow became chairman of the newly founded jazz club “Session 88” in Schorndorf (Schorndorfer Manufaktur).

Peter Mayer is well  known among the followers of mainstream jazz. He had a formative influence on the South German jazz scene, not only with his own formation but also in performances with numerous international jazz icons. Peter Mayer is among the creators of jazz rock in Germany, together with Wolfgang Schmid and Dieter Seelow. The man began to write his own compositions and lyrics with the beginning of the Krautrock movement in Germany. Playing vibraphone he formed the band “Erna Schmidt” in 1969 with second drummer Rolf Schiegl, piano and flute player Sam Drake, hammond organist Romi Schickle and an excellent brass section. The band played gigs throughout Germany and could be heard a.o. at Quartier Latin/ Berlin.

Wolfgang Schmid is an internationally well known bass player in the music business for nearly 40 years now. His fans from the first hour remember him as a founding member of Klaus Doldingers` succesful band “Passport” with Kristian Schultze and Curt Cress. Others remember his spectacular performances from the German ARD tv show “Superdrumming”, where he accompanied many famous jazz and rock drummers. The new fans of course know his trio formation “Paradox” (with drummer Billy Cobham and guitar player Bill Billford) or his actual band “Kick” with drummer Marco Minnemann (“Freaky Fukin Weirdoz”,  H-Blockx) and guitar player Peter Wölpl. Between 1962 and 1970, Wolfgang Schmidt led his first own band called “The Dynamites”. As often as other people collect nice impressions, he won many polls, played on nearly 400 records and knows the hidden corners of the world by extensive touring in different formations. The man made his first recordings with the Seelow & Mayer Formation in 1969 (This reissue of the LP “Mr. Dynamite” and the 7”inch Single “Soul-In”, to be re-released on Sonorama Records soon). The album was recorded at the Jankowski-Studio in Stuttgart, where Wolfgang Schmid studied engineering.
Posted by Unknown at 1:37:00 AM