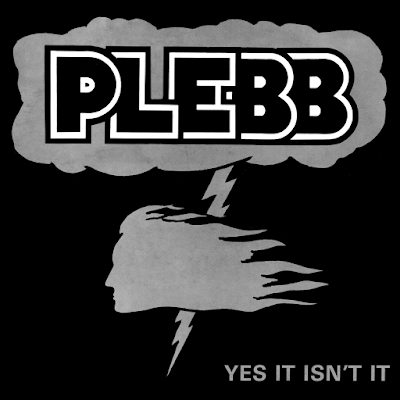 Amazing LP released on PLEBB's own label limited to 500 copies. A must have for fans of 70's Hard Rock.

Plebb from Sweden was founded 1976. The first years the band consisted of Ronnie Nilsson (Drums), Leif Bergqvist (Guitar), Per-Martin Petersson (Guitar) och Tommy Gustavsson (Bass). All members are from the town Mönsterås in the South East part of Sweden. The summer 1977 Leif Bergqvist had to leave the band due to illness (he would later  appear in the band ICTUS). Peter Martinsson replaced him on the guitar. At the time the band developed and started  to write more own songs. The song ’First Day In Roxy’ was made when they moved to their new rehearsal place,  The Roxy cinema in Mönsterås.

The summer 1978 a cassette was recorded under primitive circumstances and was copied by themselves. It was  sold to the big crowed of local fans the band had in Mönsterås. Only 40 cassettes were made. The production gave  appetite and at New Year 1978/79 their album “Yes It isn’t it” was recorded under the same primitive circumstances as the cassette six month earlier. At the time the boys were 16-18 years old. The album was made in 500 copies. With two ¼” tape recorders the background was recorded and the song and the guitar fills were made by playing the  background and record it and the new parts on the other tape recorder. The recording technique is called Sound- on-sound. No mixer board was used, only microphones directly connected to the tape recorders.

The band later changed their name to PURPLE HAZE and released a MLP in 1981 entitled ' Det Är Så Man Undrar...'.  Per-Martin was later in the band SKYSCRAPER together with QUIL guitarist Christian Carlsson. He's also in PETER  MARTINSSON GROUP together with Peter.

PLEBB videos of a reunion rehearsal can be found at Peter Martinssons Youtube Channel.
Posted by Unknown at 7:29:00 PM