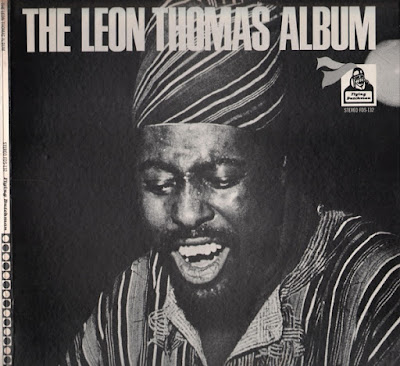 
Leon Thomas is the man best known for his otherworldly yodelling on Pharoah Sanders' Karma. In the early 1970s, Thomas recorded a couple of albums that expanded on his vocal acrobatics for Sanders towards some kind of African-tinged soul that remains hard to classify. While his first albums contained something like "light" versions of Pharoah Sanders tracks (like a very concise version of "The Creator Has a Master Plan", by the time of The Leon Thomas Album, he had very much found an identity of his own.

This album alternates between tracks that are on the surface very straight and accessible ("Come Along", "Bag's Groove") and extended tracks that are showcases for the involved jazz musicians as well as Thomas' incredible vocal chords. Some of this may occasionally seem flat, but will almost instantly reveal unexpected depth; some will seem completely out there and will soon turn out to be surprisingly straightforward. Felt all throughout the album is Thomas' almost instinctive ability to excite, at times, such as during "Um, um, um", to a near ecstatic level.

It would be unfair to call "Um, Um, Um" merely a teaser for side 2, what with it including an incredible percussion breakdown led by Roy Haynes and one of the most ecstatically powerful vocals of Thomas's career.  That being said, the side-long "Pharoah's Tune (The Journey)" is the real meat here, a psychedelic jazz odyssey that ranks among the most tripped-out free music ever.  Cobham and Haynes run the two drummer shuffle while Spaulding's flute follows Thomas's voice before busting out into a great solo.  The African oboe + bells breakdown is pure bliss and the horn section builds tension until dropping out so John Williams's electric bass can re-introduce the groove and the band can ride it out.  Just stunning.