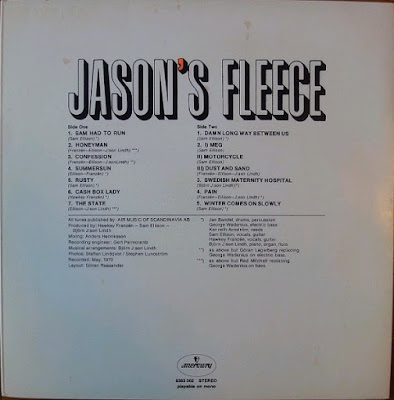 Combo existing 1970-71, sometimes under the name "Sam & Hawkey". Members shifted, most of the time including Swedish jazz/prog musicians Björn J:son Lindh (1944-2013), Kenneth Arnström, Janne "Loffe" Carlsson, Georg "Jojje" Wadenius, Sam Ellison, Hawkey Franzen and American jazz bassist Red Mitchell (1927-92). This was their only album, also involving Jan Bander on drums and Tages/Blond vocalist/bassist Göran Lagerberg. The music resembles US pop/jazz/prog outfits as Blood, Sweat & Tears, Chicago or Electric Flag. Sleeve notes doesn't say exactly how long or how much Lagerberg was involved in the band, but to me some of the songwriting and vocal style remind of late Tages stuff or the Blond album - maybe just a coincidence. The performances and arrangements are a lot more advanced though with some intriguing twists - e.g. the counter bass/scat song figures in "Confession", strings at the end of "Winter Comes On Slowly" or psych guitar/sax duet in "Cash Box Lady". Even if song structures are quite regular most of the time it's still a very good jazz/prog album with funk, blues and psych outings, performed by some of the best. "Confession" and "Rusty" were coupled as a mono '45 (Mercury 6062015). 1970 LP release in Sweden only. Not re-issued on CD. It came in a fully laminated fold/out cover with stapled sheets