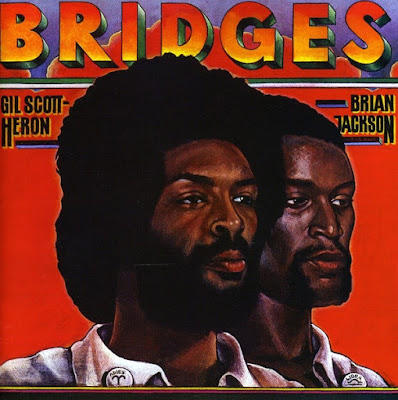 
So I am into this really great baroque/chamber pop/folk phase right now, and it seems I just can't get enough of it.  So I look up information about Nico's album, "Chelsea Girl," which was at that point, and still is, the most beautiful album I have ever heard.  Apparently, her engineer and producer, Larry Fallon and Tom Wilson, completely took over, much to Nico's disdain, and they are mostly to thank for how beautiful the album turned out.
So, how excited was I when I found out that "Chelsea Girl" was only one of FOUR albums the team collaborated on?!  Strangely enough, all of them are completely unique from one another, and none of them sound like "Chelsea Girl" in the slightest.
Anywho..."Bridges" is one of those four, and though it isn't anything like "Chelsea Girl," it is outstanding.  Gil Scott-Heron and Brian Jackson are apparently geniuses, and coupling them with those other two geniuses, Larry Fallon and Tom Wilson, was certainly not a bad choice.
Listening to "Bridges" for the first time gave me a sensation that I haven't had (that I can remember, anyway) since "Ziggy Stardust," in that I was totally blown away by it.  I couldn't really do anything else except pay complete and full attention to Gil's deep voice in songs like "We Almost Lost Detroit" and make myself a nice hot cup of chai tea.  I doubt that was the intention, but I'll be damned if intention ruins any moment with chai.
This was the fourth collaboration album from the 10 year partnership between Gil Scott-Heron and Brian Jackson, and it beautifully displays their genius and incredible soul. We've come to a point in time when many only remember Scott-Heron for "The Revolution Will Not Be Televised", the popular protest poem. Scott-Heron is perhaps the most undervalued soul singer of all time; while he does get some recognition, few place him with contemporaries Marvin Gaye, Al Green, or Stevie Wonder. His distinctive voice carries a feel of deep wisdom, reminiscent of Isaac Hayes. Jackson plays keyboard and flute on the album. In much of Scott-Heron's work, including this album, the instrumentation doesn't really go anywhere. That's not to say that it's bad, it just provides a canvas for Scott-Heron to paint on. Despite the listing of Brian Jackson as a collaborator on the album, there's no doubt that Gill Scott-Heron owns it. All of the songs are incredible, but few soul songs will ever compare to the melancholy of "We Almost Lost Detroit". Written about the meltdown of the Enrico Fermi Nuclear Generating Station, it's an attack on the supporters of nuclear power who were blinded by money, failing to recognize the dangers of nuclear power, This is where Scott-Heron excelled of course, in his songs documenting and attacking inequality and injustice. His death in 2011 and his difficulties with drug addiction and depression beforehand are some of the greatest tragedies in the music world.