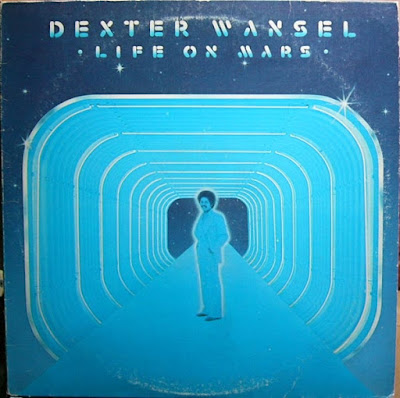 1975-76 were transitional years for Philly International. The great musicians and arrangers who once populated MFSB -Ron Baker, Earl Young, Norman Harris, Vince Montana, amongst others- were leaving in droves due to royalty disputes, One of their best songwriters- Bunny Sigler left to pursue a solo career, and the turmoil within Harold Melvin & The Blue Notes dampened some of the label's hit making momentum. To maintain PIR's status as soul music's premier record label, Gamble and Huff had to readjust by signing a slew of new artists, writers, and arrangers. Dexter Wansel was hired as a in house producer, arranger, and semi songwriter (he collaborated frequently with Cynthia Biggs so he wasn't writing songs as exclusively as he was with arranging in producing). While established acts like The O' Jays and newer acts like Lou Rawls, and Teddy Pendergrass made the most popular PIR recordings during their post 1976 period, Dexter Wansel dropped four musically adventurous, but underappreciated albums during this time as well. This two for one package covers the first two of Dexter's musical excursions- "Life on Mars" and "What's the World Coming To".

If you ever heard one of his albums, you'd immediately recognized his affinity to take on a variety of styles (namely Jazz, Soul, and Funk) which are punctuated by his trademark brand of spacey keyboard quirks. As a musician, Dexter style was considerably different from MFSB's. Where as MFSB sound was elegantly funky, Dexter's own compositions were more otherworldly and ethereal than the string laden instrumentation of MFSB.

Science fiction was big in the 1970s. So from a marketing standpoint, it made sense when, in 1976, Dexter Wansel went for a sci-fi theme on his debut album, Life on Mars. Not that the Philadelphia producer/keyboardist needed a gimmick to get over -- if you're good enough to work with heavyweights like the O'Jays, the Stylistics, and the Intruders, you don't need a gimmick. Even without the sci-fi theme, Life on Mars would have been a memorable debut for Wansel, who produced the album and wrote or co-wrote all of the material. This diverse LP is far from predictable; if you bought Life on Mars for its title song (a haunting piece of space funk that employs members of Instant Funk), you quickly learned that the record also includes mellow quiet storm offerings ("One Million Miles From the Ground," "Together Once Again") as well as Curtis Mayfield-influenced funk ("You Can Be What You Wanna Be") and pop-jazz/crossover instrumentals ("A Prophet Named K.G.," "Theme From the Planets"). In fact, one of the musicians Wansel employs is saxophonist Bob Malach, a jazzman who is heavily influenced by Michael Brecker but is more Grover Washington-influenced on this album. Ranging from decent to excellent, Life on Mars is arguably Wansel's strongest album.

This is one of his most sought after albums and for great reason. The title track alone is an infectious spaced out funk jam filtered with a strong keyboard solo buried underneath the groove and a dissonant chant as a hook- which sounds like a welcoming call for anyone traveling in space to come to Mars. The hook captures the mood of the song well. Also noteworthy is "Stargazer". It's a fast Jazz fusion workout in which the Philly strings create an atmosphere of a rocket jettin off into space for a destination travel at high velocity. That's especially noticeable at the beginning of the record- it can also pass off as a late night movie bumper. The slow jams are also noteworthy for the chill beauty it brings to the album especially "One Million Miles From the Ground" where you can truly get the feeling of being sheltered from the obstacles on Earth to share intimacy with your one and only ( Instead of literally going to another planet, you go to a state of mind with the record). Since this is a concept record, you're get those incidental tracks that serves the purpose of simply filling out the album intended concept - "Theme from the Planets" (The Planets are Dexter's backing Band) and "Rings of Saturn". Overall, the album sticks with the concept without sounding ambiguous ( a common problem with many concept records).

Dexter's second time around is more of the same. You can look at this as "Life on Mars" without the Sci Fi concept that held that album together. If you look deeply at how both albums are sequenced in this two for one, Life on Mars can be seen as something of a dream, where as this album can be the awakening in which you search for peace here on Earth to recapture that dreamy ride on Mars. Where as the last album dealt with "Life on Mars", this album can be looked upon as "Life on Earth". I'm not sure as to weather or not Dexter Wansel did this on purpose, but the two albums parallel each other in terms of emotional range but differ in its intentions- if there's any type of concept.

"First light of the Mourning" starts the album off smoothly as the awakening from the dream on Mars. It's the same feeling as waking up and remembering a good dream that stays with you all day. "Dance with me Tonight" and "Disco Lights" are pulsating slices of the good life (in the 70's) that's balanced out by more somber moments like "Holdin' On" and "What is the World coming To" which are by the numbers quiet tracks that deal with the complexities of romantic affairs and the world respectively. "Ode Infinitum" is a jazz fusion work out that has a broken beat type feel to it's horn heavy funk/ jazz. Of course with a Philly International record, you get the obligatory message song in "Dreams of Tomorrow"- which is sung beautifully by Jean Carne. The rhythm arrangement is excellent on capturing the essence of kids as tomorrow's bright leaders - it feels like a bright light is shining upon reflecting a glow of optimism in their abilities.

Overall these batch of songs make for a musically adventurous trip that listeners should take at least once. I have to admit, while this anthology is filled with a lot of excellent material, there's also a lot of other songs that could've been better. Perhaps if Dexter would've been given the ample amount of time to make these albums his main priority, they could've been sharper in terms of rhythm arrangements and building a overall cohesive sound. That minor issue aside, smooth jazz, disco, and soul enthusiasts should find plenty to enjoy here.