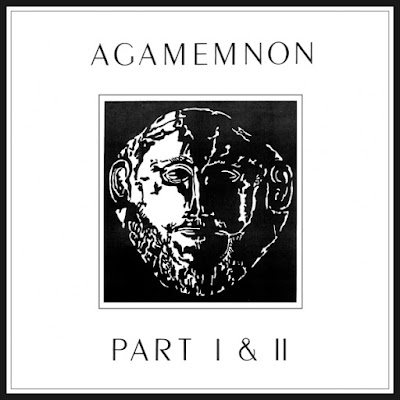 AGAMEMNON was a German band that recorded their only release back in 1980. There is some speculation that the band is actually from Switzerland, as that is where the original LP was privately released. Either way, AGAMEMNON S/T is keyboard dominated space/psych/prog music. The lyrics are in German. It is reminiscent of Minotaurus, Epidaurus and in some parts Kyrie Eleison. This album features the first two stories from the mythologic Greek hero. It is divided into 2 main tracks as Parts I and II .

This mysterious 1980's album haunted my inspiration, and luckily I eventually found the Greek mythology inspired funny record. It is also a mythic heroic deed to carry the crown of 1970's progressive rock's crown trough the eighties, an era which is yet strongly present in the sound, especially in synths. Overall aural flavor resembles slighlty the tonal textures of CAROL OF HARVEST's first record without the vocals, and also the albums of STREETMARK. Lady vocals are not though used in this record, excluding some background parts. Mentioned synths support strongly this folky soundrealm, and slightly clumsy but pleasant male vocals describe the epic tale in English. Flow of music is logical, relating to European musical heritage in classical and traditional folk music leanings, performed trough post-psychedelic art rock philosophies. The duration of time used for studying the musical themes is quite amazing, as the dual parts are constructed from minimal basics. For example the first ten minutes concist from sole phasing between two key notes, which carry multiple layers of instrumental variations and innovations, giving birth to very stimulating and pleasant voyage. Also the cleverness in arrangements is evident, an factor not always coupling hypnotic underground music. The soothing vortex of symphatetic underground rock flow has cosmic and bucolic levels, where symphonic and psychelic traditional elements merge together as good willing, mellow entity. I think this record could fit as basis of animated movie for the legend, or maybe coul work for vintage gaming background music to early 1980's "Ulysses" PC game, or reading the Gilgamesh epic. So, "We were amused by this warmhearted artifact".
Posted by Unknown at 5:58:00 PM