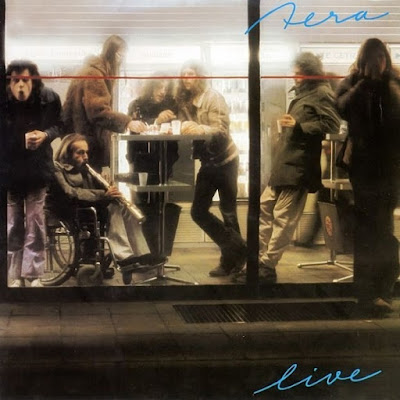 
This live AERA album released in 1980 certainly sounds different from the studio album "Turkis" that they released the year before. In part that might be because EMBRYO's guitarist Roman Bunka gets a prominant role as you might expect in this live setting.
"Scream Your Horizon" opens with this raw and aggressive guitar that caught me off guard. It does settle quickly though with vocals.This reminds me of KRAAN only not nearly as good.The guitar is soloing after 2 1/2 minutes and later around 4 1/2 minutes followed by organ. A calm with sax before 7 minutes. "Yellow Moon" is experimental then it changes after 1 1/2 minutes as a beat takes over and vocals join in.

"Stoned Out" is another experimental sounding track. "What I Can Do,You Can Do To" is both catchy and a little funky. Guitar 1 1/2 minutes in.This is the best song so far.

"Sulzheim Swinging" has some prominant sax with drums. Good song that turns more intense before 5 minutes. "Harm-O-Nights" has this raw sounding guitar at first then the sax, organ and drums take over.This is great ! "Scooter Future" is laid back early on as vocals arrive 1 1/2 minutes in. It does pick up before 3 minutes and slowly builds. Nice bass too. Sax leads before 6 minutes then it settles back with vocals a minute later. A fuller sound 10 1/2 minutes in as the vocals continue.