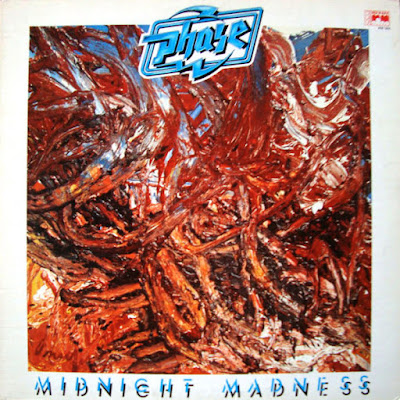 So let's get Ken's quick summary of the background first: "Phase was keyboardist's Regan Ryzuk's band and they were based out of Montville, NJ. Two years later Regan released it under the Fusion Quartet "Comprovisations" title. It's a very good album that I think will floor a lot of people and it deserves to be more widely known."

Now let's get some impressions of the music. MM says: "Instrumental progressive jazz rock of the highest caliber. From the very start this album explodes out and doesn't leave you with much room to catch your breath! Top notch musicianship with fiery solos of bass, piano, Moog and electric guitar. Odd and complicated time meters with killer trade-offs as well as incredible unison sections. This sometimes reminds me of Iceberg, a bit of Return to Forever and the Italian band Nova (at their peak). As mesmerizing at it is amazing! I believe once this gets known it will become a future rarity. Highly recommended to jazz rock, fusion and progressive rock fans."

The AC was brought into the action as well. He picked one up immediately and had this response: "Killer album! Really complex and edgy for a private fusion LP of this sort, almost getting avant-progish at times. I think the fact that the keys player uses a regular piano rather than a Rhodes also lends to this impression. Guitar gets quite ferocious at times, too. Love the ultra-technical music geek notes on the back of the sleeve! Wonder whatever happened to these guys? They really were top-notch players."

So I think those comments sum it up well. It's smoking fusion first, instrumental progressive rock second. A great mix of instrumental dexterity, with complex compositions and ferocious playing. RTF meets Kenso; or Iceberg meets Transit Express for a more obscure reference.