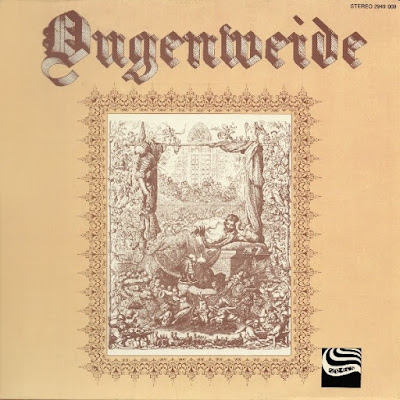 
This group started from Hamburg and has roots in the mid-60's in the City Preachers and the Fabs, but Ougenweide was really born in 69 with the break-up of the latter. Their folk rock music is a based on their discovery of Pentangle's Basket Of Light and Fairport's Liege & Lief crossed with ISB's tendency to use eastern instruments, but not the acid vocals. They chose to not only sing in German, but also to use older Middle High German, which gave them an authentic feel, especially in their Northern regions, where Platte Deutsch ruled (Low German dialects), writing their own texts, with the arrival of literature student Olaf Casalich. Even their name comes from a 12th century poet Von Reuenthal, meaning "feast for the eyes". The group is built around the Wulff brothers (bassist and multi-instrumentalist), the afore-mentioned Casalich (vocals and percussions), the guitarist Von Henko and other percussionist Isenbart, but also boasts two female singers, Blunck and Kollmorgen. Ougenweide, unlike other German Folk Prog groups like Emtidi, W&W, Holderlin and Broselmachine did not try to rock up their sound, even if they used some electric instruments.
The debut album (which has recently been released in a different recording session under the name Wol Mich Der Stunde compilation of 2004 with Steinbeck in the fold) was produced by icon Achim Reichel and boasts short songs that seem to come out of the traditional folk rock. A few of the tracks seem to be the equivalent of English folk (unless these were common to both cultures. Nieman Kan Mit Gerten, Der Fuchs (The Fox) and the instrumental Sarod certainly are very similar and were obviously strongly influenced by it (we are in 73 and FC is now an old band). While the bulk of the material was written by the group, but also a large part of their repertoire was made from trad medieval folk, one thing is certain: they sounded authentic and their virtuoso playing was very convincing (especially electric bassist Stefan Wulff, being a big part of their sound) and they quickly became a reference in their country. The album flows very smoothly until the second last track, which is a rather abnormal spoken intro for the demented closing track. Clearly the group resembling best Ougenweide was France's Malicorne.

Although historically speaking Ougenweide was not really groundbreaking, they were one of the more authentic when it came to medieval folk (along with Gryphon, Malicorne and their countrymen Parzival) and certainly never tried to become commercial. While this debut is more trad UK folk, it is not the group's most representative, but certainly an essential album, for anyone into this genre of music.
Posted by Unknown at 7:54:00 PM