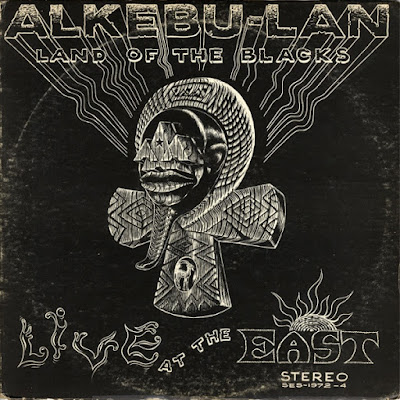 
There are altogether too few artists in jazz history that approach the spacefaring vastness of Sun Ra. Yes, the proprietors of this album wish us to know that it is not jazz 'or any other irrelevant term' but simply 'black music.' However, this is avant-garde jazz at its most free and unhinged. Within two minutes of the first proper song, we have the horns going off in two directions, the rhythm section fractured and cycling in no apparent pattern, the vocalists hollering on one side and the poets reciting on the other, feeling less like live interplay and more like radical sound collage. It brings to mind the revivalist church concept of 'make a joyful noise' being this wonderfully life-affirming and vivid cacophony. It is like a broken engine with all its parts spinning separately, waiting to be fused together into something new and wonderful. By about seven minutes, everything coalesces into that sky-reaching new form, although the album is never quite finished with noisy breakdowns and hectic changes. It is a fascinating political and musical artifact, and a truly joyous firestorm of noise.
Alkebu-Lan - Land Of The Blacks (Live At The East) was a live record released by Strata-East back in 1972 that featured a Mtume led ensemble featuring, at the time, some of jazz music's most forward thinking musicians including Gary Bartz, Stanley Cowell, Buster Williams, Leroy Jenkins, Carlos Garnett and many others. This album captures Mtume playing during his early recording career when he was known more for contributing as a percussionist on many spiritual jazz records rather than producing popular boogie hits, as he became later known more for during the eighties. Overall, Alkebu-Lan is a powerful, energetic, yet spiritual recording that features heavy rhythms, vocal chants and freeform solos. It definitely one of those records that makes more sense to listen to from start to finish rather than listening to random selected tracks. A powerful record that captures the essence of the type of groundbreaking records Strata-East was releasing during this time.
Posted by Unknown at 8:14:00 PM