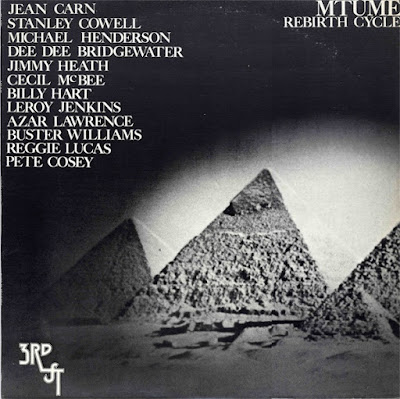 All songs written and arranged by Mtume, recorded at Minot Sound 1974.


Most people will know Mtume as the high gloss soul man from the early '80s, responsible for the excellent Juicy Fruit album. Before this though he was a jazz session percussionist, and worked with artists such as Miles Davis, and featured on albums by Sonny Rollins, Joe Henderson, Harry Whittaker and Freddie Hubbard. Before turning to his more noted soul style, Mtume wrote, or co wrote, three deep afro-centric jazz albums; one as a band leader of the Mtume Umoja Ensemble for the 1971 Strata East album Alkebu-Lan: Land of the Blacks - Live at the East, another was Kuumba-Toudie Heath’s 1969 Kawaida album, and the first one to be listed as a Mtume album was 1977’s Rebirth Cycle which was released on 3rd Street Records.

Rebirth Cycle, though released in 1977, was actually made in 1974, and the album’s personnel list reads like a veritable who’s-who of the musicians who where working in the more independent jazz scene of the early seventies.  Working on this album, you had Dee Dee Bridgewater and Jean Carne on vocals.  Strata East players like Cecil McBee and Buster Williams on bass, Stanley Cowell on piano and Jimmy Heath on reeds. This album is also the first introduction to the mighty voice of Tawatha Agee (Tawatha) who would remain the co vocalist with the Mtume band right through to the mid eighties.

Musically, Rebirth Cycle is a fusion of afro-centric deep jazz and psychedelic spacey funk.
The main piece on here, and the album’s high point, is the side long “Sais” (sigh-us). This 20 plus minute tune starts with the spoken introduction by Senegalese poet Mustapha, explaining the story of “Mystery System of Sais, the Egyptian school of higher learning from which Greek and Western philosophy was developed”. Once the introduction is over one of the most magical and hypnotic musical 20 minutes you could sit through begins.  From the slow and haunting bass clarinet solo through crashing waves of vocal chaos plus one almighty guitar solo by Reggie Lucas, all backed by a solid groove that is cut so deep it would be impossible to climb out of, even if you wanted to.  There are moments in this piece where the cacophony is such that it feels like you’re consumed in a hypnotic aural cloud, and you find yourself not wanting to come out of it, or at least for the tune not to come to an end. Then the chaos ebbs away, the bass clarinet solo slowly unearths itself from the onslaught of the other instruments and the poetry returns.  You then find yourself coming to from this 20 minute musical roller coaster ride, and you cannot help but feel total exhilaration. On Side two of this album the tracks are shorter in length and are much more afro-centric funk in style. The vocal work on this side of the album is truly sublime, whether it is “Yebo” the Oneness Of Juju style groover with magical vocals by Tawatha Agee, the haunting beauty of Jean Carn’s performance on Cabral, or the traditional African nasal style on the closing track “Umoja”. Rebirth Cycle does not contain a weak moment anywhere on the entire recording, and is really worth seeking out a copy. It's incredible to think that albums like this remain so impossibly lost for so long without being reissued, particularly in this current jazz revival climate. Criminal!!!