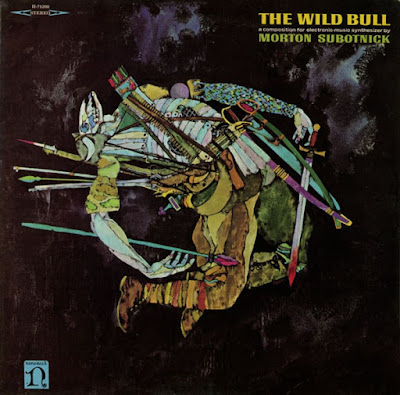 Subtitle: A composition for electronic-music synthesizer
A Nonesuch Records commission

A year after "Silver Apples Of The Moon," Morton Subotnick and his trusty Buchla synthesizer returned with "The Wild Bull." Really, to completely understand this stuff, it may be best to get a view of the Buchla:

Although the same set of sonic tools are at work on this album, the aural picture is very different.

Bringing the sound down to earth, Subotnick focuses less on the seemingly random pings and bleeps that formed the backbone of "Silver Apples." Side A of "The Wild Bull" builds on roaring background oscillators, until the bull finally begins to rise. Here, we find Subotnick focusing more on melody as the bull gets a sort of melodic theme from a fuzzed-out oscillator.

Side B sounds even more progressive with the bleating Buchla forming what could almost be mistaken for a modern IDM rhythm as the ominous, synthesized tones of the bullring wail in the background. The fight ensues as the bulls theme returns, violently rolling around with the rhythm, and finally the bullring returns with its own roar. It's amazing that such a colorful story could emanate from such a primitive machine. I suppose that's a big part of Subotnick's genius.

"Silver Apples" is the electronic breakthrough, but "The Wild Bull" refines and even perfects the alien tones of the Buchla. It's a very listenable piece for what it is and is sure to take your mind on an interesting sonic journey.

Following up Subotnick’s debut album, “Silver Apples of the Moon” was a record that was in many ways its twin partner: Titled “The Wild Bull”, it was composed on the modular electronic music system originally built for Morton Subotnick by Donald Buchla at the San Francisco Tape Music Centersequenced into two parts  totaling a length just under a half an hour and loosely inspired by poetry from the pre-technological past of humanity. But the similarities quickly end there, because whereas his previous album was based on the verse of Yeats and underlined by glittering displays of avant-garde freakouts and peaceful planetary soliloquies, on “The Wild Bull” Subotnick was touched with an inspiration far removed in both time and space and one infinitely darker than the space between the planets: namely, with a Sumerian poem cuneiformed into wet tablets sometime around 1700BC, from which “The Wild Bull” takes its title.
Morton Subotnick was a figurehead in the embryonic stages of electronic music, becoming the first ever musician to be specifically picked out by a record label to make them some synthy jams. Here, the term jams is used loosely, since 'Silver Apples of the Moon', his record for Nonesuch, was comprised solely of two sprawling experiments on untamed modular synthesizers. Both took up to fifteen minutes and were merely assortments of discombobulated sound. While it might have seemed like an avant-garde masterpiece the first time around, on 'The Wild Bull' it's more of the same -- two long, disconnected drones that are cluttered with an onslaught of whirs, whistles and scratches, as well the sound of Subotnick's exhausted synths yawning.
46 years after its initial release, “The Wild Bull” has not lost a single bit of its visionary magnitude and is still an adventurous sonic trip, finally available on vinyl again as audiophile 180gr LP that was cautiously remastered for vinyl. Limited to 500 items worldwide!

… a dark work that relies on deep, lowing tones, harsh attacks, and metallic sonorities to convey its tragic mood.   Allmusic.com

“Silver Apples” is the electronic breakthrough, but “The Wild Bull” refines and even perfects the alien tones of the Buchla.   Psychedelicobscurities.blogspot.de