Lenny White - 1978 - The Adventures of the Astral Pirates

Lenny White
1978
The Adventures of the Astral Pirates 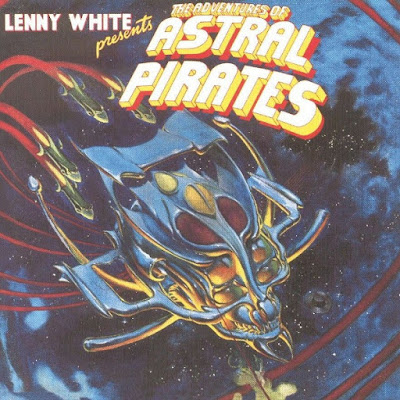 
The name Lenny White has been synonymous with the better end of the prog/fusion spectrum since Adam wore short socks to pre school but in so doing was normally better known for his cooperative efforts with bands like Return To Forever where he was able to amply demonstrate his dexterity on the skins. This release under his own moniker from 1977 which I chanced upon while doing my usual vinyl browsing many years ago was a total surprise for me as I was greeted with an amazingly clever concept style of album that had been meticulously put together with the help of an otherwise unknown keyboard player called Don Blackman, Alex Blake on bass and Jeff Sigman on guitars.

There is plenty of variety in style and structure with some stellar (no pun intended), playing from Don & Lenny in particular. Although the limelight is rightfully directed towards Lenny and his impeccable style of drumming, there are also a lot of wonderful keyboard fills and rhythms to enjoy from the other members of this ensemble. Being a concept album from 1977 was also a reasonably cool thing to do at the time although a few years down the track, this type of project would have only succeeded if the big guns were at the helm. Names such as Alan Parsons and Rick Wakeman would have had no trouble pulling a minor gem like this out of the bag on a regular basis but Lenny White being unknown to all except those lucky few who knew of his earlier work with RTF was not a name on everybody's lips. This album therefore could not have sold that many copies, certainly not here in Australia as in over 30 years of collecting, I have only seen the one and only copy which sits proudly amongst my collection of essential prog/fusion gems from the 70’s. I hope you managed to secure your copy as well as I don't believe this has been reissued on CD although it would certainly be an interesting title to resurrect.