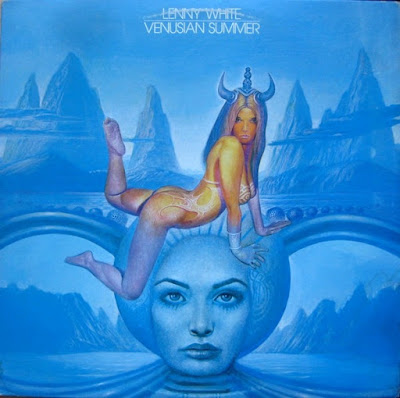 Legendary US drummer Lenny White was born in New York in 1949. After some years of musicianship in local bands, he participated in his first great job - recording of Bitches Brew with Miles Davis in 1969. In 1972 White joined the short-lived Azteca. It was after that band?s quick dissolve a year later that he joined Return To Forever, recorded 4 albums with them and got the reputation of respectable jazz-fusion drummer. Before RTF split up in 1977, White had made his debut as a bandleader two years earlier with the release of Venusian Summer.

Starting with a number of solo Fusion albums, Lenny moved into the 1980s, succeeding in genres ranging from Straight-Ahead Jazz ("Echoes of an Era" with Chaka Khan and "The Griffith Park Collection") to the Progressive Pop of his band Twennynine, Bass/Drum Funk with bassist Marcus Miller and the Jamaica Boys, and soundtracks for Spike Lee ("School Daze") and the Hudlin Brothers ("House Party").

Lenny then formed PRESENT TENSE with a mind that his musical exploration was still in its infancy. The first self-titled record included elements pulled from Lenny's entire career, but moved forward into Hard Rock, Modern Hip-Hop, and even what could be described as Heavy Metal. Today, the exploration continues with Lenny's new PRESENT TENSE, another band of younger, well-educated players who understand the complexities of Jazz, but who still have the open-minded abandon to follow Lenny's quick-to-change-direction musical lead.If you like the fusion bands Return to forever and Brand X, then you should like this very underrated instrumental record. Lenny White was the drummer of the legendary fusion band Return to forever. Known as a great drummer in the music history, he really maintains his reputation here. One must say that he is very well assisted by talented musicians: on electric guitars, Al DiMeola contributes to sometimes get the music closer to the Return to forever's style; on the other hand, there are other guitarists who clearly will remind you Jimi Hendrix himself. There are some really obscure and mysterious keyboards arrangements, like on the "Venusian summer", "Prelude to a rainbow delta" and "Prince of the sea" tracks, which contrast with the lively, funny, rhythmic & funky character of the short tracks like "Chicken-fried cola" and "Away Go Troubles Down the Drain". The restless "Mating drive" is just awesome with its impossible "fast as lightning" bass and its visceral electric guitar & organ solos: White's short & disciplined drum solo at the end is outstanding! All the instruments on the excellent jazz-rock "Prince of the sea" track contribute to form a VERY dense and loaded piece of music, in the style of Return to forever.