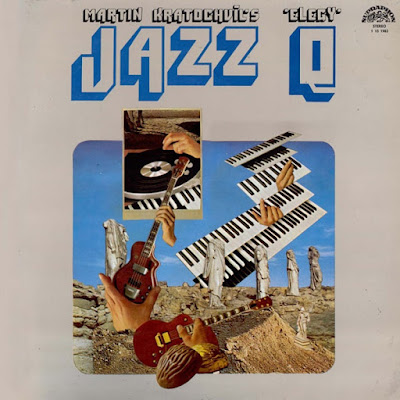 
Fourth full Jazz Q studio album (OK, this time under the name "Jazz Q Martina Kratochvila") is a great one. And different one from their previous works as well.

The band started some years ago, released common album with another great Czech jazz-rock band Blue Effect. So, their debut in studio was an eclectic mix of heavy guitar based jazz-rock and some free-jazz elements. Later in their own albums they changed many musicians, playing often guitar based jazz fusion, with some vocals.

This album (released under "Jazz Q Martina Kratochvila" name, what shows that this founder and keyboardist took a full control under the band's sound) is complex, mostly electric keys based sound. Yes, there still is enough space for electric guitar and even some vocals as well, but in whole main influence obviously is Herbie Hancock albums from early 70-s. Plenty of progressive compositions, a bit spacey sound, funk influence as well. In some moments you just can imagine them as European Headhunters!

From another hand, they have enough own ground under feet. Still melodic Eastern European roots are everywhere. Very interesting combination, and played with excellence!

Possibly most matured Jazz Q album, must have for each Eastern European jazz fusion researcher! Excellent album for every lover of keyboards-led progressive jazz fusion in Headhunters/Hancock's Trilogy key.