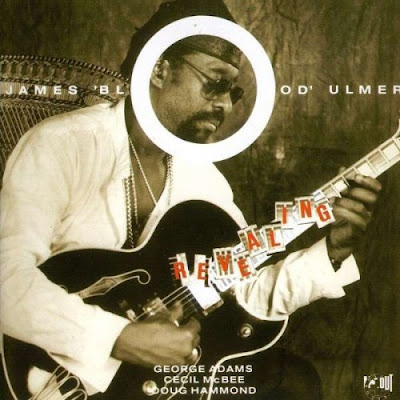 In 1949, at the age of seven, James Blood Ulmer was playing guitar for the Southern Sons, a gospel group which his father lead. By the 1960s he was performing around the country, working as a guitarist with bands such as The Del-Vikings and The Savoys as well as forming his own band Blood Brothers. In the early 1970s he settled in New York where he studied Ornette Coleman's Harmolodic music theory with whom he lived and played with for a few years. This incidentally had a huge influence on Blood's playing.

Ulmer began releasing albums under his own name in the late 70s, ranging from a free jazz style to a loosely funk-based style without ever settling into one particular defining approach. In the early 80s he founded Music Revelation Ensemble with David Murray and a revolving cast of supporters and in 1985 he formed Phalanx with George Adams, Sirone, and Rashied Ali. With those two groups giving him a steady outlet for his free jazz leanings, Ulmer began to explore the blues in earnest in his solo career. While dipping back occasionally into his bag of other styles, straighter blues marked by his unique guitar stylings and gravelly vocals has dominated his solo album output of the 90s and 2000s.

Recently Ulmer has been working with Vernon Reid of Living Colour fame, who has produced three of his albums. In April 2001, Reid convinced Ulmer to record at the legendary Sun Studios in Memphis. There they recorded the album Memphis Blood: The Sun Sessions, in just three days with Reid producing the album and playing on several tracks. It was Ulmer's first release featuring completely of non-original material which were covers of classic blues songs. In 2005 he released Birthrite, his most personal album to date, composed primarily of original material about his life and background.

After his time playing and touring with Ornette in the early 70's and before his 1979 U.S. debut which featured Ornette and his cronies, Blood snuck this German release out without Ornette involved in any way (except perhaps as a spirit guiding both Blood's playing and George Adams's crabbily detailed blowing). It's way less frantic than some of his later stuff though, even though straight jazz disciples will still get their hackles raised by the distortion, the density, the strange and relentless attacks (and not just from Blood). Ornette or no Ornette, Adams is a worthy partner and in some ways this is the prototype for Phalanx, which I enjoy mightily, even if this one feels a little more in touch with traditional guitar jazz albums than the harmolodic free-for-alls or amped up funk-fests that are more readily associated with Ulmer. First three tracks (I've only ever known this as a CD, never as LP) move at pretty similar tempos while the longest ("Love Nest") closes things out on a slower motion (I hesitate to call it a "groove") that's more contemplative, gives you some room to breathe, and at that is still jarring and jagged when it chooses to be. I like this one a lot, it's very listenable, but tunes don't stand out quite as readily as they do on the best Blood albums. On the other hand, I can play it in mixed company without feeling like my friends are only humoring me by listening politely. A good debut, but he gets better.
Posted by Unknown at 8:20:00 PM