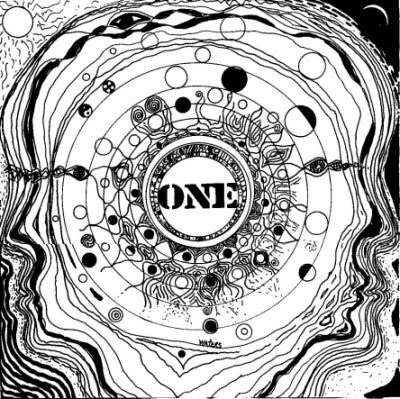 
Although the Gravity Adjusters Expansion Band (GAEB) started in 1967 they remain one of the long lost and underestimated groups that explored the areas of sound sculpture, improvisation, experimental music and free jazz. The group have their roots in playing in and around the San Francisco Bay Area, and finally recorded their first LP in Los Angeles. Free jazz drummer Lee Charlton seemlessly shifs the moods from jazzy phrasing into the far more abstracted ideas of the world of sound sculpure. It is this abstract world where the GAEB mostly reside, using the invented instruments of multi-media artist Richard Waters, many of whose percussive and bowed instruments incorporate water filled resonators to bend and tune the sound. Although many other improvisors at the time like AMM, MEV, Sonde and Taj Mahal Travellers all made extensive use of home made and adapted instruments, the GAEB are a very different concern with their own unmistakeable identity. Their first LP “One” appeared in 1973 on Nocturne Records, a small Californian label. It was the first of their 2 LPs, the second appearing some 8 years later. This CD edition is a reissue of the first LP from the master tapes and also contains some 15 minutes of extra material from the time.

It's pretty amazing, that the Gravity Adjusters Expansion Band have been making music since 1967, and we hadn't even heard of them until about a week ago. Part of the reason might be that their first lp, released in 1973, was an ultra limited pressing on a tiny label. And that the second, in 1981, was equally hard to come by. Which is a shame as thisis some seriously Aquarius type stuff.

But better late than never, and boy are we digging this stuff like crazy. The whole concept and sound of GAEB was based around sculptor / musician Richard Waters and his hand made instruments, essentially sound making sculptures, many of which incorporated water filled resonators used to bend and tweak and twist the sounds. So cool. Just check out the list of instruments: diatonic sound generator, bazooki, pipe drums, Aeolian space horn, synthesizer, waterphones, mytar, saws, bass violin, horizontal and upright phoniums, birdcalls, microtonal revolving sound generator, sgourd (?), superball mallets, water gong drums, log drums, springs, keyboards, assorted gourds, Princess oil can and more. Phew. From the list you can pretty much deduce that the sound of One is mainly percussive, but calling this a percussion record would be way too reductive. Instead, this is a sprawling exploration of ambient sound, very reminiscent of GAEB's sonic compatriots Taj Mahal Travellers and AMM. The Gravity Adjusters Expansion Band take percussive sounds and spread them way out, letting the overtones and reverberations shimmer and merge, so while these are still distinctly rhythmic arrangements, with plenty of tolling and chiming and ringing peppered with random bits of clatter and clang, the various sounds and their after affects create soft billows of background burble, muted melodic murmurs and all manner of sweetly sonorous and slow shifting soundscapes, each track a lush sonic explorartion of bowed metals and vibrating strings, of objects both struck and stroked, a potential cacophony smoothed into lengthy dreamlike shimmers. So completely mesmerizing.

You can of course hear traces of modern outfits like Avarus, No Neck, Sunburned Hand and the like, bands who obviously owe quite a debt to groups like The Taj Mahal Travellers and GAEB, but the sounds on One manage to sound completely unique, perhaps because of the time period, or maybe the music making process, or even the instruments themselves, hand made and impossible to duplicate, most likely all of those things. Whatever the reasons, One is fantastic, a simply gorgeous, an intimate collection of improvised ambient beauty. (Aquarius)

Originally released in 1973 as a private press LP, 'One' is the first document of GAEB, a mysterious sextet of Californian improvisors. Formed in the late 60's by artist Richard Waters and jazz drummer Lee Charlton, the group made music using Waters's kinetic sculptures. His most important creation was the waterphone, a sort of acoustic synthesizer which used water in its resonators to produce warbling, tone bending vibrations similar to th edeep sea harmonies of humpback whales. Together with this extraordinary instrument, the group assembled a complex line-up which included musical saws, log drums, assorted gourds, bird calls and an Aeolian space horn, incorporating them all into elaborate, jazz-inflected space jams.

Their music was completely improvised, with sounds randomly thrown into the mix with the aim of creating a "free music atmosphere". As worthy as these intensions may have been, however, the music soon becomes a tangle of half-realised ideas centred more on the ingenuity of Waters's handmade instruments than the sounds they actually generated.

The extended version of the title track is the most convincing thing here, a bubbling jazz ramble firmly anchored by sturdy bass violin playing and kaleidoscopic drum patterns. As the track develops, however, the solid instrumental framework that holds the piece together slowly dismantles, as waves of ambient abstraction aimlessly crash into the composition and gradually pull it down.

While trace elements of the music of instrument builder Harry Bertoia, percussionist Christopher Tree's 'Spontaneous Sound' and Sun Ra's 'Strange Strings' occasionally flash to the surface on 'One' and the remaining tracks, the majority of the record is too loosely strung and ill-conceived to deliver the head charge that the cover's psychedelic drawing suggest is waiting inside. Edwin Pouncey (I have had to make some factual corrections to this underwhelming review - cheers mate) --- The Wire

Unlikely reissue from this legendary/lost free music ensemble in the vein of East Bionic Symphonia/AMM/Group Ongaku/MEV/Taj Mahal Travellers etc. Gravity Adjusters Expansion Band were active on the west coast of the USA from 1967 and recorded two hard-to-find albums, of which this CD reissues the first, originally issued on Nocturne Records in 1973, bundled with 15 minutes of extra, unreleased material from the time. Their sound is based around the use of invented instruments made by multi-media artist Richard Waters, bowed and plunked instruments that used water-filled resonators to amplify and warp the sound. The sound is a little like a free jazz orchestra playing no-mind hymns specifically attuned to the floating architectures of Harry Bertoia, with a ton of that endlessly refracted bowed drone sound of Takehisa Kosugi's early Taj Mahal work. Great to see this back in print: a mind-blower of the highest order and a beautifully unexpected (tho you hadda figure someone in that time/place would've tuned-in on the notion of the communal brain-erasing effect of mass cultic drone/jazz waveforms) piece of the puzzle. Highly recommended.--- Volcanic Tonque