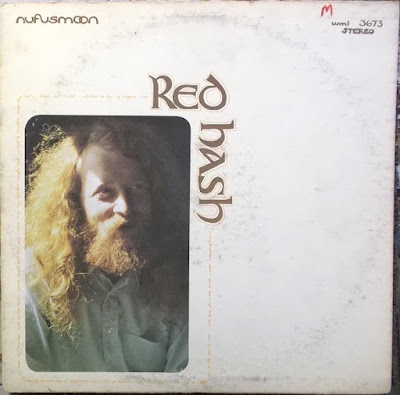 In 1972, Higgins was caught up in a drug sting and faced serious charges. While awaiting sentence in early 1973, he realised that he might never again have the opportunity to make a record. Spurred by this sense of urgency, he recorded an album in a single forty-hour session with members of his two previous groups: Jake Bell (guitar, vocals), Maureen Wells (cello, vocals), Terry Fenton (piano, organ), Dave Beaujon (bass), and Paul Tierney (mandolin, flute, vocals). Besides singing and playing guitar, Higgins also played drums on a few cuts. Higgins was jailed soon after recording was completed, so final mixing and production was left to a dedicated group of supporters. The album was titled Red Hash (after a nickname given to the redheaded Higgins during his time in custody; this title was not chosen by Higgins) and self-released on the tiny Nufusmoon label. Although it received some airplay, Red Hash suffered from limited promotion and no live support, and failed to sell out its modest printing of a few thousand copies.

After serving thirteen months in prison, Higgins held down a series of jobs in the Connecticut/New York area, eventually marrying and raising a son. He performed with a number of local groups and continued to write and record music, but he did not seek to release any of this material commercially and quickly faded into obscurity.

During the 1990s-2000s, a small cult of devotion bloomed around Red Hash, a cult that included Ben Chasny (of Six Organs of Admittance) and Sub Pop staffer Zach Cowie. Together they spent nearly two years attempting to locate Higgins before Cowie (by then at Drag City) finally managed to track him down in late 2004. Cowie then signed Higgins to Drag City and oversaw the first official re-release of Red Hash in July 2005. Soon after, Higgins played his first ever solo show, supported by members of Random Concept and his guitarist son, Graham.

We've always marveled over the way popular success works ... While a certain amount of talent is necessary, frequently success seems to be largely a result of fate and dumb luck. Take a guy like Connecticut's Dave Higgins. Basically a folkie, he's every bit as talented as someone like Michael Murphy, or Dan Fogelberg. Unlike Murphy and Fogelberg, Higgins never enjoyed anything even remotely akin to popular success. How come?

The early-'70s found Higgins imprisoned in a Connecticut jail. With help from States Attorney Francis McDonald (thanked for her assistance in the liner notes), in 1973 he cut an album for the small Nufusmoon label. (We're not sure whether he was still imprisoned, or whether he cut the album after getting out of jail.) Co-produced by Higgins and Chico Cardillo, "Red Hash" was surprisingly accomplished. Material such as "Telegraph Tower", "I Pick Notes from the Sky" and "Unable To Fly" was largely acoustic folk in nature, though "It Didn't Take Too Long" and a couple of other songs featured a full band. For his part Higgins' had a great voice, played great acoustic guitar, injecting most of the set with an engaging "real person" edge (to check out those credentials be sure to check out the dark and disturbing "Cuckoo" and the mystifying "Down On the Farm"). Interestingly, a number of references compare the album to Merrell Fankhauser and Mu. The comparison is certainly there. Tracks such as "Thicker Than a Smokey", "Windy Child" and "I Can't Sleep At Night" have the same drifty, pseudo-psych feel that makes the Mu records so cool. While many hyped micro-presses are simply shit*y, this one's an exception and is well worth the asking price. (In case you care, this one's also listed in Han's Pokara's 3,001 Record Collector's Dreams.)