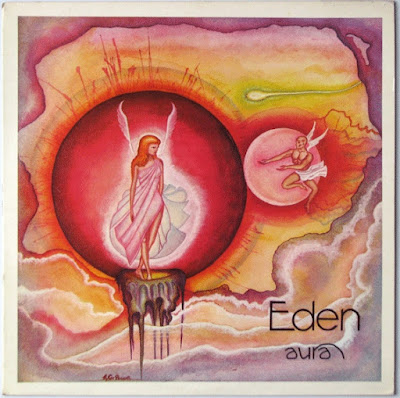 
Eden was a French Electronic duo from late-70's, relatively known among prog fans.What most people do not know is that the leader and main composer Hubert Vrayance, born in 1958, became a leading chief officer and later police commissioner.The other member was drummer Alan Lyss and their sole release ''Aura'' came out in 1979 on Oxygene, recorded in July of the same year at the AA Music Studios.The armour of Vrayance was his bass pedals, a Hammond organ, a solina string ensemble and a couple of synthesizers.

The music of the duo was a Symphonic/Electronic affair with many Classical and symphonic elements, propelled by the solid drumming of Lyss, thus their sound often closed the more symphonic side of Progressive Rock.The main man though here is Vrayance and his dual keyboard deliveries with a varied sound and a unique atmosphere, going from Baroque period to psychedelic textures.His approach on romantic and sensitive arrangements comes close to the sound of LE ORME or 80's German oddity OCEAN, mixing the power of a Classical-influenced organ execution with the floating sound of synthesizers.They kind of remind me also of TRIUMVIRAT and SCHICKE, FUHRS & FROHLING quite often, the display of dramatic, Classical keyboard arrangements with the rhythmic drumming and the changes between melancholic orchestrations to more powerful and grandiose themes is pretty rewarding.Side A provides the more Classical side of the duo with the inventive use of organ next to the solina string and the synths, while the second is a bit more quirky and Electronic-drenched, still offering some pretty fast and accurate drumming, but the music becomes more abstract and updated with the solina string and the synths becoming the centerpieces of a more cinematic but still very dynamic sound.

In 1985 Vrayant would join the police, but he still released a solo album in 1986, ''Landscape 80'' on FLVM, dealing with a police officer, who wrote a book around the extra-terrestrials and the Bible.During the later years of his career he worked as secret agent on political investigations and this was reputedly the reason he was eventually sacked.

Classical- and symphonic-oriented Electronic Prog in the vein of SCHICKE, FUHRS & FROHLING, swirling around rich, keyboard rhythms and more romantic soundscapes with a Baroque flavor.Nice and recommended stuff.
Posted by Unknown at 7:39:00 AM