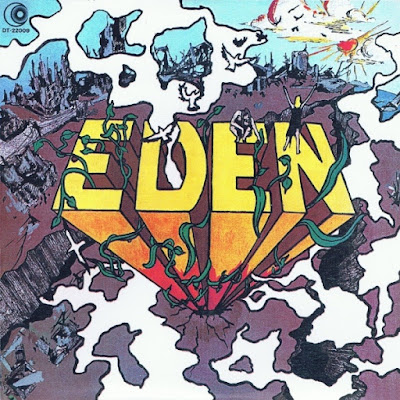 Eden are a keyboard lead quartet from Quebec who play a standard symphonic progressive rock with French vocals on about half the album. While there is a guitarist, his role is primarily subordinate, and the leads are generally created via synthesizer - mostly a String Ensemble, but I hear some Moog as well. I didn't discern any organ, Mellotron or Rhodes. There's nothing extraordinary about this album, other than perhaps the early 70s styled artwork, but it's still a pleasant listen and one where most progressive rock fans will appreciate.

This sole album from Quebecois band Eden is strongly influenced by Yes, Ange and Atoll , sung in French (no special Quebec accent is noticeable) and the very naïve sleeve artwork is created by Roger Brunneau. This group is your standard prog quartet with the bassist singing but the majority of the tracks are written by the KB man, although only the drummer did not get any writing credits.
Unfortunately, the artwork is not the only naïve thing on the album as the vinyl (now very rare but counterfeited since and bootlegged on Cd since this year) containing the music is also fairly naïve, also. A slowed down Yes influence is the dominant characteristic , but the vocal delivery remind heavily of Atoll singer Andre Balzer even if the timbre is not the same. Most of the tracks are mid-tempo and rely heavily on the overly symphonic side of prog that was so common in the late 70's. I personally was never really convinced of Eden (not to be confused by the other Eden group - most notably the French group) and I had gotten rid of the album a long time ago, and had almost forgotten them until two years ago the ProgQuebec site listed them in their site. So I managed to get a hold of the old cassette (a Maxell XL II-S that was recorded in 81 - and still is quite correct some 25 years later) I had made and re-listened to it.

The first side is relatively slow going and is content of rather sub-par symphonic prog, not being overly demonstrative either. The second side has much shorter tracks and shows them in a more exploratory mood, but unfortunately, their lack of experience was clear: as soon as they started something less "basic" (as if anything in prog was basic), it turns out to have a rather show off quality that fits so well the naïve adjective I have used so far.

Had this group managed to make further albums, I am certain that they would have managed better things. Not really essential and at best a footnote in the prog history, but can be worth your while if you cherish Atoll's first two albums.