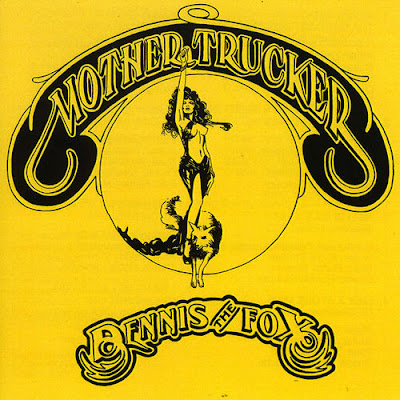 Privately release album by Dennis Caldirola AKA Dennis The Fox. This album has received attention in recent years for it's off-the-wall and very unique style. Impossible to pigeon-hole in terms of style or genre.

Only a handful of heads have encountered this mad beast of an LP, and it's top 40 at least of all US LP's for me: utterly dark and sleazy lowlife nirvana! Like seeing God in a burst condom stuck to the tailpipe of a rusty pimpmobile, finding out Jesus stole your mama, looking for the meaning of life in a puke pile by a truckstop motel .... kinda scary how real this dude is! The cover is awesome and the music ranges from seedy bluesy loser zones into fucker up dive bar epiphanies. I can't think of any other record more at the end of the road seeking salvation in the tawdry. Wicked sense of humor. Twilight Zone. One of those smart literate guys attracted to funky situations. Like so many obscure LP's, the names of people on it seem too weird to be real .... Alfie Van, Audie Bridges ... backup vocals by Mary Bliss & the Bixens. Blows Damon & Fraction out of the water as far as my own need for kicks goes. "

all i can say is YES and YES

Email ThisBlogThis!Share to TwitterShare to FacebookShare to Pinterest
Labels: Dennis the Fox, USA