Black Nasty
1973
Talking To The People 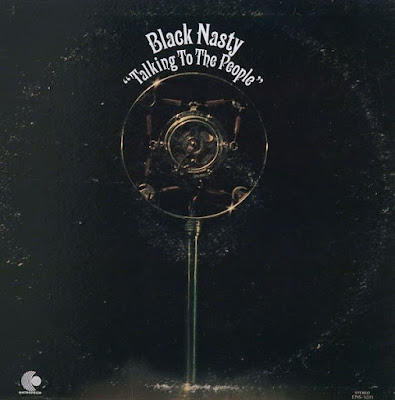 While released on Stax Records, Black Nasty were Detroit all the way. Combining hard, unpolished funk with brutal guitar noise, the band obviously was deemed way too 'radical' for early '70s black radio standards. Their sole release, this gem right here, didn't create any waves at the time of its release. It's been treasured by Raw Funkers ever since its resurrection in the '90s, tho'.

"Talking to the People" encapsulates everything great about this band. Artwell Matthews' crashing, thundering drums and Mark Patterson's bass create a sizzling, loping, menacing funk groove for James 'Blood' Ulmer to blaze his electrified gee-tar madness over. A powerful message tune, riding it firmly on the one, it starts the whole band on vocals, giving it that multi-layered, tribal vibe.

That ballads weren't Black Nasty's strongpoint is soon made clear with "I Must Be In Love". There's still a mildly funky rhythm underneath it all, but the vocals are pretty sugary and the overall atmos is a bit too preconceived and stale for my taste.

Gettin' back to the real deal, Black Nasty then pumps out the monster jam "Nasty Soul". A ferocious Funkadelic-styled anthem, with that droning, heavy beat and Ulmer's spastic guitar noise on top of it. The self-explanatory "Getting Funky 'Round Here" is the undisputed party joint, drenched in a nasty clavinet-driven stew of rock solid all-out jammin'.

Up next is the group paying hommage to John Lee Hooker and their hometown... "Black Nasty Boogie" ain't lyin'. A filthy, irreverent, boisterous boogie romp that could give Canned Heat a run for its money. Preposterous...

"I Have No Choice" is the second mellow track here, but it's a good one, with lead singer Johnnie Mae Matthews wailing like a bona fide Southern Soul man. Sounds a bit like some of Bobby Womack's great early '70s mid-tempo ballads. The softest spot, however, is reserved for the breezy "Rushin' Sea". Nice ballad, but pales in comparison to the funk laid down here...

"It's Not the World" gets thangs back in the pocket; a loping message-driven jam with more of that typical LOUD guitar danglin' on in the back. Ulmer's solo here references to Chuck Berry.

Finally, "Booger the Hooker" is a well-chosen Last Stand of Stank: tongue-in-cheek lyrics deal with the clean boy gone wrong dope-wise and is another super hard slab of gritty funk rock.