Azteca
1975
Pyramid Of The Moon 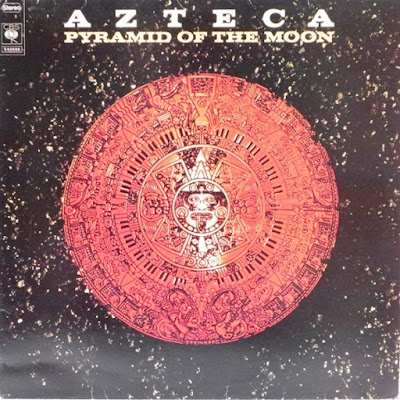 A monstrously huge ensemble, sometimes numbering as many as 20, formed by brothers Pete and Coke Escovedo (father and nephew of Sheila E, most famous herself as an associate of Prince), Azteca put out two monster latin-jazz-rock albums on Columbia in the early 1970s: a self-titled debut, in '72, and this one, in '73. There's a link personnel wise here with my previous Courtial post, in that Coke Escovedo, Errol Knowles and Bill Courtial are on both.

Check the personnel on this album! The connections go way deep: Santana, Herbie, the west coast Latin scene. Some heavy cats, and a hip chick! What can I say but, if you're not already familiar with this excellent group, get hip! What a magical musical time this was. Azteca's debut has been reissued and can be bought new (when in stock!), albeit at a fairly steep price (it's a Jap import, put out on Sony Japan, so unless you hail from those Pacific isles you'll most likely end out paying quite a bit for carriage and excise, never mind the cost of the actual CD).

Also noteworthy is the superb artwork, by Bruce Steinberg, a real renaissance man of the funky West Coast scene (most famously associated with the mighty Tower Of Power), who sadly died fairly recently (Dec 2007). His Aztec style roundel, which the band used on both their album covers, incorporates guitars, horns and a circular keyboard motif... Moy groovy Mr Steinberg!

Azteca reformed in 2007, leading to a new album and a DVD, neither of which I've yet had the pleasure of seeing or hearing.
Posted by Unknown at 11:42:00 PM