A Foot in Coldwater
1977
Breaking Through 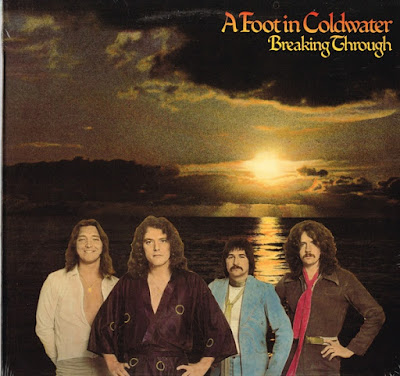 
An elusive rarity that seldomly surfaces, even in collector's circles. Please refer to my earlier posting regarding this band's back story. A Foot In Coldwater split in 1975, despite seeing moderate success in their native country of Canada. A few years passed before the members regrouped for "Breaking Through" in 1977. The group's new direction was notably more stylized for AOR radio, though there's no shortage of their signature punchy driving sound. Released on Attic Records, the album came and went with little fervor and soon the band were defunct for good.

This is a very well done album that is often unfairly overlooked even by fans of the band. It's a mystery why the record made little impact, though perhaps the disco craze blossoming worldwide played an integral role in its failure. Though the band only resurfaced a few brief times over the years to perform reunion shows, A Foot In Coldwater is no more. Members would later join bands such as Private Eye, Gus, Leggatt, Champion and Moxy.

Dig this ultra-rare effort from a band who always seemed to be on the cusp of a breakthrough, only to find apathy at the end. In retrospect, fans have not forgotten this fabulous classic Canadian act.