The Sensational Guitars of Dan and Dale - 1966 - Batman and Robin

The Sensational Guitars of Dan and Dale
1966
Batman and Robin 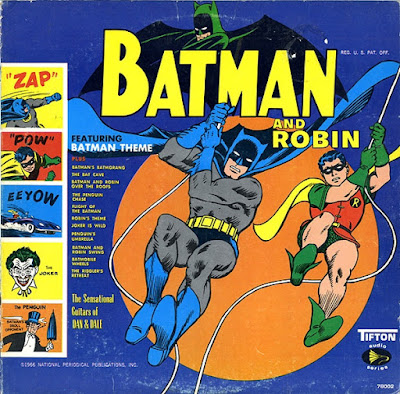 
You aren’t going to believe this one. In 1966 kids were going wild over ABC’s “Batman” television show. A New Jersey toy company wanted to cash in on the craze and rip off kids by releasing an album called “Batman and Robin.” This slab of vinyl had nothing to do with the t.v. show even though it was chock full of tunes like “The Penguin Chase,” “Robin’s Theme,” “Batmobile Wheels,” “Flight of the Batman” and “The Bat Cave.”

Here is the unbelievable part: Producer Tom Wilson hired Sun Ra and several members of his immortal Arkestra (including supposedly John Gilmore, Marshall Allen and Pat Patrick) to collaborate with members of the New York-based rock and blues band, The Blues Project (best known as Al Kooper’s band even though he wasn’t an original member) and record the sides as The Sensational Guitars of Dan and Dale. Why is this unbelievable? Because Sun Ra,  the otherworldly jazz composer, band leader and musician, was better known for bringing Outer Space and big band-tinged compositions into the experimental frenzy and fun of free jazz.

The album features twelve songs – ten instrumentals and two songs with vocals. It’s obvious that this was a quickie – something they churned out in a day or two. The rfiffs are simple and repetitive and many of the tunes consist of the Arkestra horns turning out recycled classical melodies (like Tchaikovsky’s “Fifth Symphony,” Prokofiev and Chopin) so they wouldn’t have to pay licensing fees.

“Batman and Robin” features pretty traditional instrumentation, especially for a Sun Ra session, of organ, guitar, bass, drums and horns. The album is pretty dang groovy actually. Because it is a record for kids, you won’t find any atonal experiments or any of Sun Ra’s infamous counter melodies layered over big band-like melodies here. It actually sounds like a Southern R&B instrumental combo in the vein as Booker T. & the MGs. Even though the riffs are simple, there is a surprisingly joyful aspect to the playing. It’s obvious they had fun at the sessions. It is also obvious that Sun Ra did in fact play on part of the album as you can tell by the organ blast at the beginning of the album’s first song, “Batman Theme.”

The real star of the record is the uncredited guitar player – it could be The Blues Project’s Danny Kalb or it might not be him. The “Sensational Guitars” is actually it pretty apt title because I imagine the album sounds like what would happen if Steve Cropper was given free reign to rip fractured, Yardbirds-like solos over every one of Booker T.’s song.

The verdict: An interesting and unexpected addition to the already eclectic Sun Ra catalog.
Posted by Unknown at 9:52:00 PM