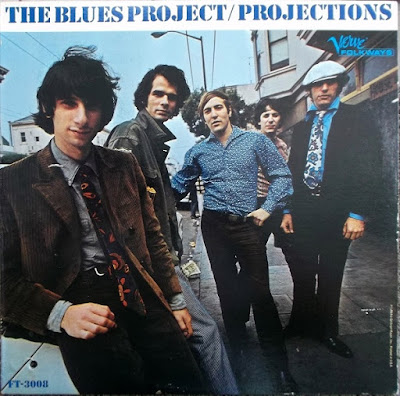 Despite having a lot of things going for it - lots of talented musicians and an closer ear to musical trends than most American bands - the Blues Project never put it together.  Sure, "Flute Thing" was an underground hit, but this album is no underground classic.  R&B was still the band's main element, and they usually did a good job with it.  Kooper's "I Can't Keep From Crying" kicks off the album with a supremely catchy bass riff, "Wake Me, Shake Me," and Chuck Berry's "You Can't Catch Me" are all excellent tracks.  Projections is not all R&B of course, and the band experimented with classical folk (the intro to "Steve's Song" which is better than actual song) and the infamous jazz-rock underground hit (an oxymoron par excellence) of "Flute Thing."  The latter is what both the album and the band are most remembered for - but is it any good?  It is an instrumental constructed around a nice lead riff, whichtakes advantage of the fact that Kulberg just happened to be an excellent flautist, and so everyone takes turns soloing.  Well, everyone but Katz that is, but since he was stuck playing bass, it is not a real loss.   Not many people were creating jazz-rock at this time, so it certainly was ground-breaking, but nowadays it is just a nice song.  The same can be said for other little contemporary cool moves, such as Kalb's Indian-like guitar lines on "Cheryl's Going Home".  R&B may have been their bedrock, but Projections' blues numbers are its real drag.  Kalb had his own easily identifiable technique, using quick runs with lots of note bending, but he mistook plodding on indefinitely for drama (Muddy Waters' "Two Trains Running" runs for over ten minutes and Jimmy Reed's "Caress Me Babe" is a blues that is all atmosphere and no excitement).  His speed also led him to get a bit sloppy in parts ("You Can't Catch Me" among others).   Still, he was clearly the instrumental star - even though Kalb's bass lines are usually catchy, and Kooper place-holds when given the chance to solo ("Caress Me Babe").  Kooper displays the most songwriting talent, the nice folk-rock "10" shows him merging his earlier pop talent with Dylanesque folk-rock, and a touch of jazz.  Sure, Steve Katz has a song, but it is ...well, it's a Steve Katz song.  Slightly goofy in nature, delivered in his earnest straight-man voice, just like his cover of Bob Lind's folky "Cheryl's Going Home".  He never really hit his songwriting stride until after the Project broke up.  The result is an album that has its moments and good songs ("I Can't Keep From Crying" is my mark for a keeper), but feels like less than the sum of the individual players.

Indeed, this was their only album that was entirely recorded in a studio.  Afterwards they split over a disagreement on whether or not to add horns, with Kooper and Katz forming Blood, Sweat and Tears.