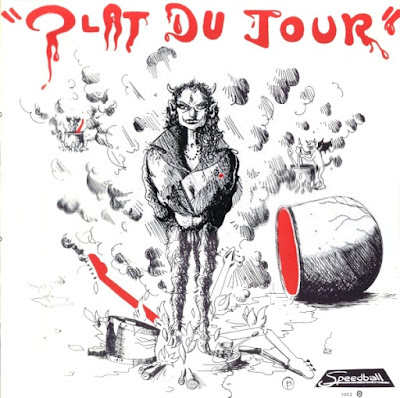 Very obscure and unknown, strictly short-lived and super rare to spot, but worth mentioning in the end, PLAT DU JOUR mark a dot on the French eclectic Prog map, somewhere near Rouen apparently, during the year 1977. Their self-titled LP was released under the label Speedball, five compositions (or six, depending on how the first two-part epic is regarded) lasting around 35 minutes. The music can be placed either in jazz-rock, either in avant-prog, but with those two essences clustering and a bit of extra fuzzy psychedelism, cold bass Zeuhl and straight progressive rock being heard, it's wiser to take in account all the nuances.

The details about this project, the story behind it, or the musicians' profile are scarce. The main lineup consists of Vincent Denis (guitars & vocals), Rodolphe Moulin (bass), Oliver Pedron (percussion), Alain Potier (saxophone), Jacques Staub (keyboards, percussion), Francois Ovide(percussion) and Francois Maze (vocals) - the latter two noted as guests, each on one track only. On the SP "Totem/Zil-bra", printed by Speedball around that time as well, Phillipe Doray (likely the artist from PD Asociaux Associes?) is noted as composer. PLAT DU JOUR is mentioned to be one of Ovide's early par-experimental, par-groovy projects (the radical SO & CO. and this laid-back one) - making it more surprising not only that he is a guest musician, but that he also plays drums instead of guitar -, while nothing relevant is known about the other artists. The ensemble's short session could be due to the fact that Ovide moved on to play with Albert MARCOEUR, WEIDORJE, GWENDAL and John GREAVES. There's an additional mention ballparking this band's style close to ETRON FOU LELOUBLAN.

Heavy on the mix, slightly experimental, snappy and groovy and of an uncommon prog taste, Plat Du Jour has its interesting to hear parts. Inside their consistent instrumental universe, rhythms and improvisations kick in, the guitar dominates most of the album, but the saxophone builds one great momentum as well. Tricky music at the beginning - fuzzy, windy, jazzy, mood-mixing afterwards. Vocally, there's both a hoarse, agitated, crazy and a looser taste. The back-cover of the vinyl includes the lyrics. Rare if not unique, as a progressive classic collection item, this is first of all for the "catchy/wacko/fun/funky/avant/zeuhlish/jazz-rock" music aficionados.

I have read time and again people relegating the lost and obscure records as lost causes - albums left for dead in the wake of popular hard hitting easy to grasp, and perhaps more importantly: lucky and exposed releases. Who knows what makes the world go round - except for money that is? And who knows what makes or breaks an album? The answers aren't that clear-cut as most people will have you know. There is a reason why Magma still are going strong without a trace of commercialism in their bloodline...

Plat du Jour are one of my greatest musical discoveries from the last year or so. Man oh man - I'll tell you, for even the most hard edged prog rock fans - there's bound to be something of interest in this magical release. The funky almost Stevie Wonder rolling rock of the opener 5 Autoroute - spliced up with that distinctive French Zeuhl vibe that oozes through in the rhythm section. The space fusion of the second cut Zilbra, that alternates between psychedelic sneaking - slowly developing sonic sunrise notes - to the maniacal propulsive shapeshifting jazz rock that it suddenly becomes. Or maybe the mad avant tinged Motown madness of Totem that comes next with its crazy French vocals, and an insistent groove to it that will have even the funkiest brother at the party shakin' dat ass on the coffee table. Ahhhh you want soothing beautiful high soaring intimacy with some of the most alluring vocal work known to man? Got you boy! L'Homme is your thing then. The way it breaks into those sandcastles of slow moving guitar figurines on top of the hand drums - makes me curl up my toes and shoot my load out on the rim of the planetary systems. WUUUUHHUUU!!!!! Nah you want the low down tunnelling dirty rat fusion that drills its way down in the hard brown soil with Rock n Speed! The track that takes the streets of Rouen anno 1977 directly into your living room with boisterous beats, tooting sax and the tangible swaying refinement of the ending that closes with a kiss instead of the mayhem that started it. 11 Autoroute finishes off the album with the booming stuttering bass dancing an ethereal waltz with the effervescent synths and docile yet affirmative drumming. It then breaks into the Zeuhlish fusion Motown groove, that all through the album threatens to overtake the moods and tempers of the individual tracks - but it doesn't. The balance is always kept - leaving the listener with an astonishing musical example of eclectic behaviour.

I love everything about this release - the fact that it manages to be funky, psychedelic, Zeuhlish, Motown throbbing, experimental, soothing, avant-guarde in some places - and then not really, because what this album holds in spades, is the will and dexterity to transform even the most convoluted of pieces into something lovable and beautiful. It is literally that good. So come on people - all together now: Re-issue, Re-issue, Re-issue!!!!!!!!!!!!!!

Suffice to say, that Plat du Jour tops out at the mesosphere - and then sets off to the moon and beyond. Together with the earthy homage coming from the rhythm section - that deep mole foundation, the interplanetary galaxy fighters of sonic bliss ie synths, vocals, reeds and guitars are headed for the unknown fast whilst deeply anchored in the ground. This music is eclectic beyond anything, which is one of its biggest and most alluring attributes. If you want to listen to it, because lets face it, music is nothing if nobody ever sits down and has a listen to it, then by all means. It needs your ears and heart badly!
Posted by Unknown at 3:57:00 PM