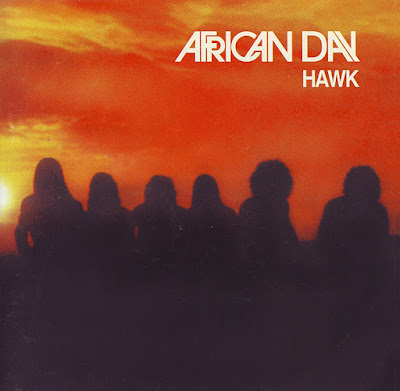 Bonus tracks are listed in the wrong order on the CD back cover.


Relatively unaware from the rest of the planet, South Africa apparently had their own rock scene in which a few groups evolved. The first being Freedom Children and here, Hawk. Indeed the apartheid was an important factor running the country and the generally well-respected boycott made that a few artistes left the country (ie: Manfred Mann), but others remained and fought the Apartheid in their own manner. Whether Hawk really did so is anyone's guess, but the strong black African music sprinkled all over their music does give a hint they did. Hawk was a group that was apparently managed from afar by Lonstain, but the problems were numerous between artistes and producers.

The Johannesburg quintet was formed Dave Ornelias (ac guitar, vocals) and Keith Hutchinson (winds & Kb) and comprised also guitarist mark Khan, bassist Richard Johnson and drummer Braam Malherbe (most likely a descendant of Huguenot, but no relation to the great Didier). The five musicians studied African music throughout a few trips and guest in their rented farm in the outskirts of the city. Apparently the group managed quite a live success based on their song Africa Day, then went on to record it along with more songs to make up their first album called after their success piece, that survived the apartheid Regime's censorship rules.

Playing more concerts, the management were often not forwarding the money and by the time the group was readying its second album Africa, She Can Cry Too, the management enforced a line-up change where keyboardist/saxFflurteman Hutchinson and bassist Johnson were given their walking papers. The second album was a very different thing altogether, and the band was apparently able to tour Europe to good acclaim, but to little rewards financially or musically. The group disbanded a while after returning to the country, then reformed a few years later

When it comes to South African music its kind of hard to define what is progressive and what isn’t, particularly for people who aren’t familiar with the culture. Of course it doesn’t help that the country went through nearly half a century of virtual isolation on the international stage due to their apartheid policies, and honestly my only other musical point of reference from that period is Freedom’s Children, a group whose music was just as difficult to classify. Guitarist Julian Laxton, who would join the band for their second and final album, came from Freedom’s Children, and there are some notable similarities between the bands, although Hawk was considerably less heavy and employed a wider range of native percussion, provided mostly by a session musician identified only as ‘Dave’.

Vocalist/guitarist Dave Ornellas is one of the blackest-sounding white guys I’ve ever heard, and the vocals harmonies throughout the album will leave you double-checking the album artwork and liner notes just to confirm these are actually five white guys. The percussion is outstanding, featuring copious helpings of native hard drums and other acoustic percussion. This helps to make up for production that is less than stellar, with the mixing of the album in particular coming across as haphazard at times. The vocals tend to be unevenly amplified, and at times the saxophone and especially the flute get buried in the mix.

Other than a pretty decent rendition (except again for the poor engineering) of George Harrison’s “Here Comes the Sun” these are all original compositions, with only drummer Braam Malherbe receiving no specific credits for either arrangements or lyrics.

The album’s high point is clearly the opening epic title track, a seventeen minute-plus wandering tune that shifts between blasts of guitar, acoustic percussion breaks, wispy flute work, multi-part harmonies, and occasional spoken-word passages. There is also more than a few points where the band appears to resort to improvisational jamming not unlike some of the tamer examples of Caribbean reggae.

Otherwise the songs are brief, decent but un-ambitious, and quite steeped in vocal harmonies and percussive syncopation. There’s nothing to really make the music exceptional in any way, other than the fact it provides one of the few available examples of modern popular music from a country that never managed to export much of that during this period. I can’t say this is really a must-have piece, but it has some interest value to students of modern folk and ‘world’ music. Three stars is the best I can give this album in all fairness, although if your progressive music tastes lean away from lots of acoustic percussion and layered folk vocals that might be too high.