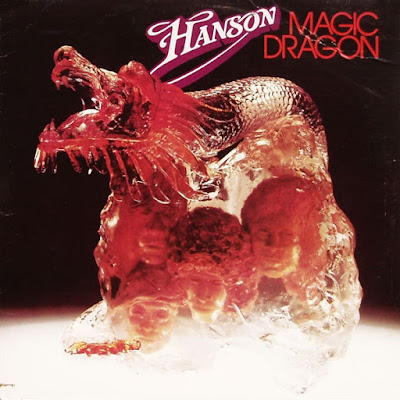 
For an album released on the Manticore label (home to the always over-bearing Emerson, Lake and Palmer), this 1974 release came as a pleasant surprise.  The fact that it features one of rock's true chameleons in the form of Donald Hanson Marvin Kerr Richards, Jr.(aka Junior Hanson, aka Junior Kerr, aka Junior Marvin) was simply an added bonus.

The guy's discography is a hornet's nest and I'm not going to try to untangle it here, but Hanson was apparently a post Keef Hartley band project, as well as serving as the debut of his new stage name - Junior Hanson.  The group's original line up consisted of Hanson, bassist Clive Chapman, drummer Conrad Isadore and keyboard player Jean Roussel.  The quartet survived long enough to release one LP 1973's 'Now Hear This' (which I've never heard).

Prior to recording a sophomore album, the band underwent a wholesale personnel shake up that saw namesake Hanson the only carryover.  The revised line up featured percussionist Brother James, drummer Glen LeFleur and bassist Neil Murray.

Overlooking the butt ugly cover art (nice job there Bob Defrin), "Magic Dragon" is surprisingly good Hendrix inspired guitar rock with enough psych touches to make it interesting to folks collecting that genre.  Hendrix wannabes are usually about as interesting as toenail clippings, but co-produced be namesake Junior Hanson and Mario Medious, the album gets off to a kick-ass start with the blazing 'Rocking Horseman' and seldom lets up. Virtually the entire album's worth hearing, but stand out tracks include 'Love Yer, Need You', 'Looking At Tin Soldiers' and the awesome title track. Okay, I'll add the funky 'Boy Meets Girl' to my list of favorites.  While this one's a little more pop oriented than the rest of the album, it'll appeal to all you substance abusers in the crowd.  You simply have to wonder how this one got lost.  Hanson had everything needed to be a major star - great vocals, first rate chops and you have to wonder why he was criminally overlooked.  I'm sure it had nothing to do with the fact he was a black Jamaican living in the UK.

The band apparently undertook a short US club tour in support of the album, but by the middle of 1974 were history.  Hanson subsequently metamorphosed into Junior Marvin and ended up a member of Bob Marley and the Wailers.  When Marley died in 1981, Marvin ended up fronting The Wailers for a couple of albums.
Posted by Unknown at 8:29:00 PM