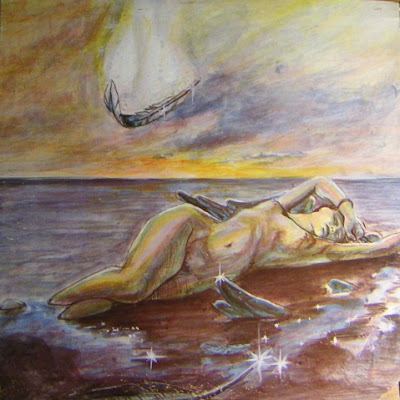 
Having delved briefly into the history it seems Gabriel Bondage was a Chicago-based outfit, active between the years 1973-81, that formed when lead singer Rex Bundy recruited bassist Tony Stram from a local Pink Floyd tribute band. In their early days they supported Rush and a couple of their personnel had also played with future members of Chicago. They actually cite Chicago as one of their main influences along with the likes of Genesis and ELP but just don't expect anything like that here. Their own music is very folksy, mainstream even, and personally I think they sound more like a soft-prog Crosby, Stills & Nash than anything.

'Angel Dust' was the first of their two albums in the mid-seventies, the second being 'Another Trip To Earth' which was released in three different colours of vinyl. A third album was planned but had to be shelved when the Dharma label folded and, in spite of Dharma's collapse, the label refused a buy-out of the band's contract by Columbia. Both albums hint at a blending of the sacred and the profane with the colloquial references to drugs in their titles and the religious subject matter of some of the lyrics.

For example 'Babylon' is a song that to me portrays the deterioration in man's character with the Babylon of Revelation serving as a symbol of the US. The opening bars remind me of 'Sandman' by America (I was sad to hear that Dan Peek had died at the age of 60 in July this year) except it soon gets spacey with wind effects, saxophone and droning synthesizer. It has a majestic air that's filled with some rather overwrought vocals, and these give it a theatrical dimension that suits the theme of human perspective set against that of a supernatural power.

'You And The Wind' is vaguely reminiscent of Simon & Garfunkel's 'Parsley, Sage, Rosemary & Thyme' complete with mandolin, harpsichord and flute, while 'Ladies And Gentlemen' progresses from its subdued CSN beginnings of acoustic guitar and spidery flute to surging Mellotron that's perhaps in imitation of The Moody Blues. These guys seem to have been aiming for some kind of ambitious English-American crossbreed but there's not quite the former's distinctive harmonies or the latter's cosmicism, nice though the music is.

The West Coast spirit is completely abandoned on the free-roaming terror of 'Bondage', a chaotic-sounding piece and the only track that lives up to the kind of PCP-induced nightmare hinted at in the album title. It sounds like a battle being fought deep in the psyche and involving malevolent sax and aggressive riffs. Apart from this track 'Angel Dust' isn't exactly overburdened with progressive moments and the religious nature of several songs may put some listeners off. However if you're looking for music that inhabits a melodic world somewhere between prog rock and folksy West Coast then the fat lady has well and truly sung.
Posted by Unknown at 6:57:00 PM