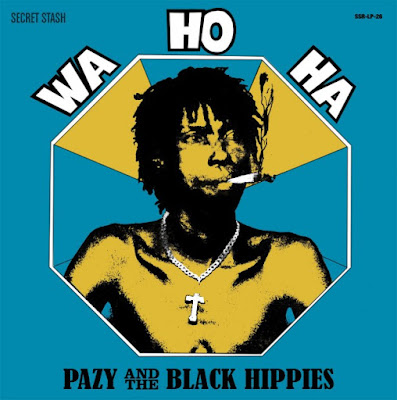 The Black Hippies were a Nigerian rock band in the mid-1970s led by songwriter Joseph Etinagbedia, a.k.a. Pazy. In their earliest incarnations, the band played a distinct style of harder rock, one that bore many of the trademarks of Nigerian music; from a visceral vocal style to the psychedelic funk that touches every corner of the songs. Their debut self-titled album was recorded in '76 by producer Odion Iruoje and features five of the band's tunes from their earliest days, finding funky pre-disco rhythms playfully co-existing with light-headed fuzz guitar in Pazy's celebratory, somewhat psychedelic tunes. The band would shift gears with subsequent releases, going more in the direction of reggae than hard rock, but their debut represents the band at an inspired beginning point where their take on hard rock was something truly unique.

While Reggae music had its prominence in 70s Nigeria, it was highlife and Fela Kuti's afrobeat that gave the country its own musical national identity. Originally from Southern Nigeria’s Benin City, Edire “Pazy” Etinagbedia and his band The Black Hippies released their second LP, Wa Ho Ha on EMI Nigeria in 1978 building on a body of work that effectively glides between these styles creating an incredibly unique record that has become a cult classic. Wa Ho Ha features Pazy and his Black Hippies engaged in call and response vocal anthems all backed by incredibly deep rock steady grooves and afrobeat rhythms filled with funky horns and psychedelic guitar accents. Recorded in the legendary EMI Nigeria studios, Wa Ho Ha typifies the 70s Nigerian sound enthusiasts the world over have come to know and love, but puts an inimitable twist on it.

This is not Afrobeat music and sounds nothing like Fela or his fellow Afrobeat artists. The first two songs are reggae inspired, the rest disco inspired. The harmonies and singing are based on Nigerian modalities not Western modalities so they sound a little strange to the Western ear. Pazy lays down a lot of call and response with the Black Hippies. Also, at particularly intense moments, they all launch into collective animal cries. The rhythm section seems to be trying very very hard to play reggae and disco style and failing. Again and again a unique rhythmatic sound is created as native African rhythms creep into the sound. Don't misunderstand--the music is not quite reggae and not quite disco, but Pazy and the Hippies definitely know how to groove.

Since so much of American music is derived from African traditions (though not from the traditions prevalent in Nigeria), the contemporary musical fusion of American and African music (Highlife--jazz + Nigerian or Afrobeat funk + Nigerian) can be very dynamic. Pazy seems to actually be trying to play American music not fuse it with Nigerian. In their failure, they created some absolutely wonderful and eccentric music.

You cannot help but dance to this wonderful music.