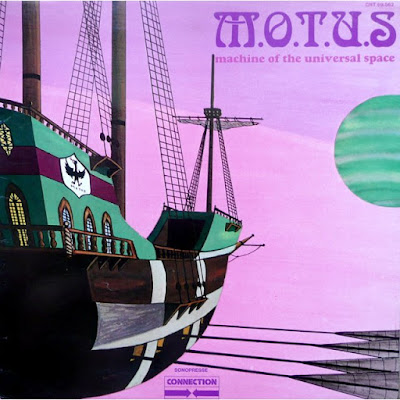 M.O.T.U.S. were a French progressive band that had a very English sound, due largely to the fact that they had an English singer in Ian Jelfs (formerly of the UK band Circus). Their material was heavish, with quite a few jazzy chord progressions and guitar parts. To be honest with you, their material was pretty good, but nothing to get all that excited about, and their sound was maybe like a cross between early Caravan (with the organ style) and some of the more "rock-based" Vertigo acts.

The only album from the Frech progressive quartet (inc. one British member) appeared on the market in 1972 (on a small Connection label) and featured English lyrics sung by Ian Jelfs - former guitarist of the UK progressive rock formation Circus (of Mel Collins fame). This rare album will certainly delight the majority of fans of early Caravan, Traffic and Brian Auger's Trinity (circa 1970) - with dominant and powerful Hammond organ sounds; tight rhythm section and impressive, jazzy guitar licks (somewhat similar to Allan Holdsworth and Robert Fripp). This LP doesn't contain any fillers and certainly belongs to the top of the early 70's French progressive rock. This CD has been carefully remastered (from original source) and sounds deliciously!