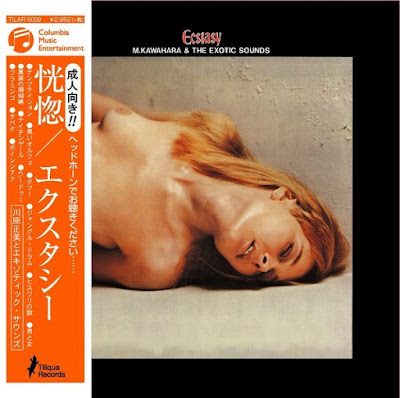 I think the word "exotica" got mistranslated as "erotica" in Japan. That's the only explanation for this record which sounds like a woman getting whipped and spanked with a Les Baxter LP playing in the background.

The Tiliqua label is back, and not soon enough for these ears let me tell you. Since last year's explosion of 1960's classic Japanese porn-star albums I've been so sexually frustrated I've had to spend most pre-work mornings phoning into television helplines to vent my pent-up anger and desire for Japanese starlets with guns, so it comes as something of a relief to see Tiliqua return to this much sought-after blue series. This particular disc comes to us from the very capable stable of Masami Kawahara, not a name which might ring any bells instantly with you - but you might like to know that this was the same insane brain who was behind the very awesome and highly acclaimed Ike Reiko album (still to our mind the best in the Tiliqua catalogue, and now long sold out). So you should know what to expect if you managed to bag that little gem of a release, this is prime quality Japanese porn-jazz, with some Latin-flecked funk edits featuring a very saucy young lady moaning over the top. In the liner notes M.Kawahara reminisces that he doesn't remember who the girl was, but says when she had to moan she was touched or petted on cue - now that sounds like hard work eh? The funniest thing is that some of these tracks are actually totally insane, take the fourth track (it has a name in Kenji so please don't ask me to write it out) for example, all tribal drums and fractured synthesizers as our protagonist comes to a rather violent orgasm (amidst some whooping and chanting from what sounds like a cannibal filled jungle). This is utterly crackers stuff and for crate diggers, people searching for something totally unusual or those of you looking to get past the readers wives section of Razzle, this should be just the ticket. It's like Martin Denny's incredible "Exotica" series, except with some carnal activity going on in the background - how genius. Well I love it, and since we only have limited copies in stock you'd better act quickly if you want to bag one. Oh, and did we mention the gorgeous vinyl-reproduction Japanese packaging? Essential Purchase!
Posted by Unknown at 6:58:00 PM