Kevin Fisher
1977
The First of Fisher 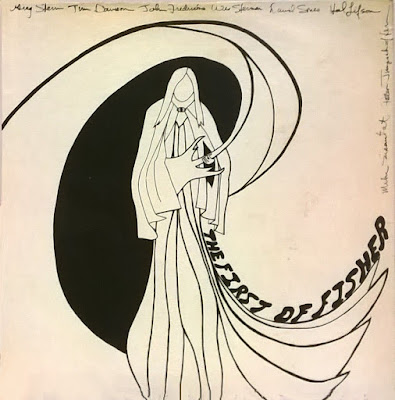 For some reason, judging by the homemade cover, I thought this baby was going to be an outing in progressive excesses ...  The leadoff instrumental "Overture" didn't exactly change my impressions, but so much for first impressions ...

So what do we know about namesake Kevin Fisher and 1977's "The First of Fisher"?  Next to nothing.  It's clearly a home grown vanity project and what few references we can find indicate that only 75 copies were pressed.  As far as we know, this hasn't seen a CD reissue.  Technically the album has a fairly primitive sound, but in musical terms it's all over the spectrum.  The acoustic ballad "Lullabye" has a heavy classical feel (Pentangle came to mind the first time we heard it), while "Flying" sports a 1950s' vocal group feel and the horn-propelled "Pirate's Song" recalls a post-David Clayton Thomas Blood, Sweat and Tears.  Of course first impressions are seldom entirely wrong and in this case the second side sports some mundane progressive moves in the form of "Indian Dance" and "In Search".  Again it's fairly raw, but not without it's low-keyed charms, including the pretty ballad "A House for Wendy".
Posted by Unknown at 2:47:00 PM