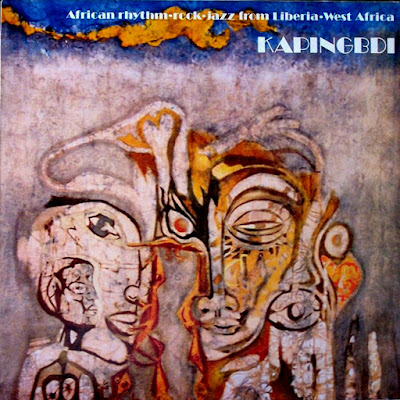 
Kapingbdi was formed in 1976 by musician Kojo Samuels in Monrovia, capital of Liberia, a small country in west of the continent. They released 3 albums between 1978-81, all in Germany, until break up in 1985.
Post here the 1978 debut, titled "African Rhythm Rock Jazz From Liberia - West Africa", summarizing the group's sound, which combines local rhythms with jazz rock and funk touches, in a very dynamic and trip atmosphere. This "mix" is clear in instrumental, prevalent in most of the 7 tracks, with various types of percussion, sangba, balafon and shekere and eletric guitar, saxophone, flute and drums. The lyrics appear sporadically in English or local dialects.
No main highlight because we hear a good sample of afro rock / jazz from beginning to end. Highly recommended for fans of the style!

You could wrap a king cobra around these bass lines and still have a pocketful of silver left from a crisp green Andrew Jackson. Innovations may not their bag, west African funk drifting across man made borders from Nigeria and Ghana tempting routes to obey and personally replicate - 'Now Is The Time to Cry for Love' like a extended b-side remix that fisherman's hat wearing stubble faced DJs snort up their asses until their faces go purple, but when knuckle twisting fills swim back upstream to converge on the loose definitions of a main melody, it's like a stick of dynamite on its wick's end rolling down the aisle of a hand grenade factory. Their singer needs more support from his producer, their live studio sound muddled in some post-production extras, but all critiques aside, Kapingbdi's first time shoe shuffles are seriously worth snooping through downstairs vinyl vaults for.