Kandahar - 1975 - In the Court of Catharina Squeezer

Kandahar
1975
In the Court of Catharina Squeezer 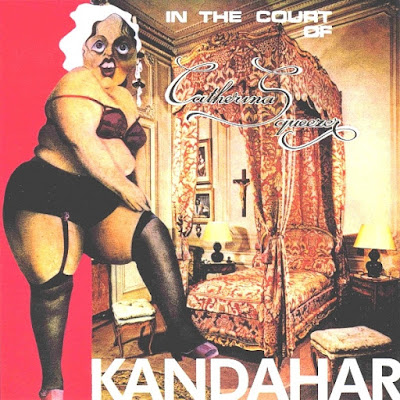 
Difficult not thinking of Crimson's debut album when citing Kandahar's second album, but it is only a humorous wink art Fripp's gang, rather than a real homage to their music. Indeed the unchanged quintet (the two added windblowers not being permanent players) delivers their second batch of sonic delicacies recorded in the late 75 spring, but they changed a bit the accompanying toppings, giving it a slightly funkier feel, but we're still into delightful jazz-rock with a tad of Kent's county capital. With their suggestive artwork, once again Kandahar proves non-sense humour and surrealism are Belgian trademarks.
The opening Jungle Dreams confirm the funky thing, as we could be out of Philly or Isaac's Hayestack. Indeed the track oozes of De Visscher's funky guitar, Bogard's ultra-symphonic ARP Synth and Power Of Tower horn section. The following Still Have My Soul is probably as much Memphis Tennessee (Stax records) a track they'll go. LA Mood is a horn-laden track, but thankfully does have the funky flavour of the previous tracks. Song For Catherina is as close to being to the title track, and if it wasn't for a cheap-sounding synth line, this might have been one of the album's highlights, even though the last part is sung.

The flipside starts on the slow (at first anyway) Lehti Jumps and hearing that track evolve into a frenzied Colosseum-type track is a pure joy, and it's just too bad that the track ends in a an aborted manner the way it does. The 16-mins Day I Came To Life is obviously the album's highlight and the group's chef d'oeuvre. And they knew it too as they'll even go through the trouble of hiring a string quartet for just one section, but the fact is that evertuy section of that track is pure bliss as it goes from almost baroque (the horn entering the track and repeated later on) to excellent jazz-rock, but plenty of progressive rock just the way we like it. With this epic, Kandahar sounds like themselves and nobody else except for a tad of Quebecois prog between Maneige and Harmonium (the passage with choirs and flute), but I doubt this these groups ever got to Belgian (even Flemish) ears back then. This is their crowning achievement, but it'sc also sad they never kept up the effort, because it's likely they would've done more of these.

After this album, keyboardist Karel Bogard will travel to the eastern Asia and eventually end up in Far- East Asia for a while, studying philosophy before coming back. But he's actually moved over there on a permanent basis for more than two decades. In the meantime, ITCOFCS is a worthy successor to Sliced Ham, and in some ways it easily surpasses the debut album. Should you one day chance upon it, don't hesitate for a second on either the debut or this one.
Posted by Unknown at 12:26:00 AM