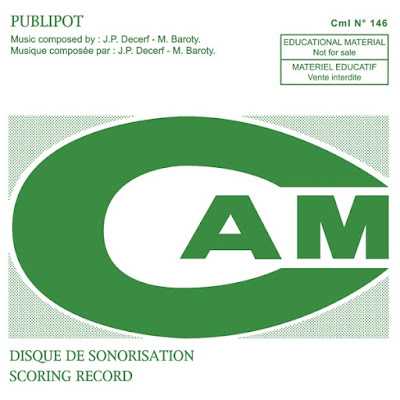 Still in the year 1977, Decerf released another album on CAM (this time with M. Baroty as his collaborator), entitled Publipot.  It is an outrageous, dizzying delight in the same vein as the previous two, and no less great.  Publipot is amazing.

The opening track, "Sea Spell", is another in Decerf's series of seaside sublimities – and one of the very best at that, innocent, nostalgic, and utterly mysterious, with its rolling waves, burbling sound effects, and building harpsichords.  Every other track is a knockout (except perhaps the clownish "Musing on Children", which is still very good).  I won't go over them all, but I'll single out a few: "Gladsome Moments" is another riff on the "Black Safari" structure, a little less distinguished than the other two but still great.   "Phantasm in the Night" is pretty amazing; I don't want to seem unimaginative, but it actually really does sound the way Phantasm looks, at least at the film's best moments – sort of a baroque, other-dimensional horrorscape.  "Brain Project", is about what you'd expect at this point, big synth washes, pastoral seaside evocations, and stubby little organ notes counterpointing long eerie ones.  It's wonderful.

The closer is "Brazilian Ballad", one of my all-time favorite tracks, a transcendent piece where Decerf's compositional and aesthetic tendencies (at their best here) are brilliantly juxtaposed against a weird Brazilian rhythmic structure.  The result is a surprisingly affecting, wistful composition full of beauty and nostalgia and deep undercurrents of melancholy.