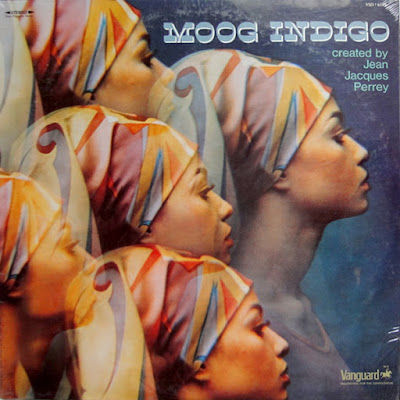 
Moog Indigo is the eighth solo album by electronic music pioneer Jean-Jacques Perrey. It was released in 1970 on Vanguard Records, an independent label. The ninth song, a cover of Beethoven's Turkish March called "The Elephant Never Forgets", was used as the theme song for El Chavo del Ocho.

Contrary to what some might expect, the title track bears no resemblance to the jazz standard "Mood Indigo"; in any case, the intended pun wouldn't work as "Moog" is a Dutch name hence its vowel sound is quite close to that in the English "vogue"

If you like the early, shinybubbly moog synth sound, you might like this. Don't expect any masterful compositions, however: tracks like Elephant... and Puppet... trade on the novelty of the sounds rather than any satisfying compositional quality. And the absurdity of Hello Dolly and Bumblebee is good for only a single hearing; even the classic EVA wears out its welcome fairly quickly. If you're really keen on Perrey check out the Best Of available on import from the UK