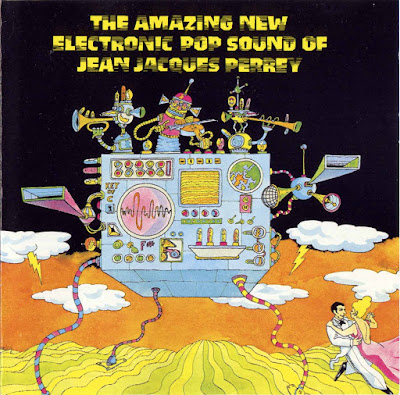 
In 1968, the happiest music of all human history was created by a small, balding, middle-aged frenchman called Jean-Jacques Perrey. Now, there's no objective way to measure this but frankly if you disagree you're probably Queen Victoria - and she's dead AND a monarch so her opinion really doesn't count. The Amazing New Electronic Pop Sound of Jean-Jaques Perrey is, surprisingly, an early electronic pop album by the aforementioned, consisting of fairly primitive synthesisers - mainly, I think, the now legendary Moog (it's pronounced like mohg, people!) synthesiser along with an ondioline - and backed by a reasonably traditional band. Although his use of the synthesiser to create cheerful sounds and noises is pretty enchanting, it's the way that the new technology is applied to the music that makes this album shine. The combination of originals and covers of popular tunes are transformed into an odessey of aural delight by Perrey's imaginative use of his instruments.

Here's a little trivia break - isn't it strange that one of his songs (The Little Ships) became something on an internet sensation thanks to the wonderfully goofy short animation Going to the Store?

Pretty much every track on this flight of musical fantasy is an utter joy to listen to, but there are a few real stand-outs that are particularly lovely. Obviously The Little Ships is up there thanks to the bizarre effects throughout the song and the infectious melodies, but tracks like The Little Girl from Mars, Frere Jean-Jaques and Brazilian Flower are all perfect expressions of happiness via music. In every note there is a potential smile, in every song the seed for a good day. This album is the wonder and excitement of a child seeing something new, it's the feeling when the first day of summer really is a wonderful day, it's every heartfelt gift you've ever given or recieved, it's being smiled at by a pretty stranger in a coffee shop - in short, this album could be the soundtrack to everything good, joyous and fun in the world.


Perfection is more or less irrelevant, but happiness isn't, and The Amazing Pop Sound makes me happy every time.