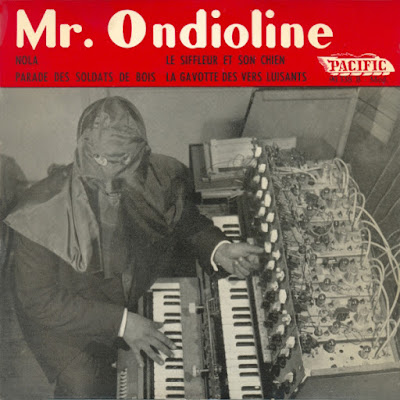 
Enjoy the vacuum tube-y goodness of the Ondioline as demonstrated by its best known ambassador and salesman, the legendary Jean-Jacques Perrey under the guise of his rather sinister looking alter ego Mr. Ondioline from this 1960 French E.P.

Synthesized sound appears in just about every form of music today, and most of us take for granted how the range of synthetically possible sounds have joined the ranks of instruments. At one point, synthesizers were a big novelty, and folks were amazed at how closely the sound resembled the real thing. Along with several other pioneers, Jean-Jacques Perrey took synthetic sounds from a parlor trick in mimicry to a versatile instrument capable of producing previously unheard sounds, which has developed into the range of genres of electronic music we hear today. With Perrey having just celebrated his 84th birthday, we look back on a career that spans five decades.

Perrey was in medical school when he first met Georges Jenny, inventer of the Ondioline. A precursor to the machinery of today, this proto-synth could emulate the the sounds of several instruments and allowed the player to control the vibrato by physically moving the key surface. This made it possible to truly humanize the sounds, and if played right, became almost indistinguishable from the real thing. And Perrey played it right. So deeply did Perrey believe in the potential of this instrument that he became a sales rep for Jenny and traveled around promoting the Ondioline, largely through demonstrations. These demos, with Perrey playing the piano and the Ondioline simultaneously, became wildly popular and ended up becoming a touring nightclub act in Europe. He eventually brought his act to the US, where he broke the Ondioline to new audiences.

Perrey’s profile rose, and he began working with musicians like Charles Trenet, Django Reinhardt, and, at the height of her career, Edith Piaf. As a big supporter of Perrey’s work, she provided him with recording facilities, which he used to create music by splicing and rearranging sections of tape, a process now known as “sequencing” and conducted on a screen using software. The results were remarkable experiments in yet unheard sounds, and Piaf sent one of these tapes to music contractor Carroll Bratman, who immediately invited Perrey to come to New York. Here, Perrey found a new set of collaborators like percussionist Harry Breuer, Andy Badale, and Billy Goldberg, doing both creative and commercial work. It was when he linked up with Gershon Kingsley that Perrey created the work that truly demonstrated the potential of electronic instruments, and the music that he would be most celebrated for.

At the time, Kingsley was an arranger for Vanguard Records and began working with Perrey’s abstract tape loops, combining them with more conventional musical arrangements of the time. Their first album together, The In Sound From Way Out (1966)(not to be confused with the Beastie Boys album of the same name), made Perrey’s experimentalism a bit more accesible, augmented with Kingsley’s arrangements. Yet, the music palpably broke new ground with the types of sounds included in the compositions—cartoonish bleeps and boops that would become Perrey’s signature. His work with Kingsley influenced his later solo work, maintaining the odd pallet of sounds but also maintaining somewhat of a conventional aesthetic.

Perrey continues to release music and engage in collaborations that keep him with the times, working with artists like Luke Vibert, Dana Countryman, and David Chazam, in recent years.