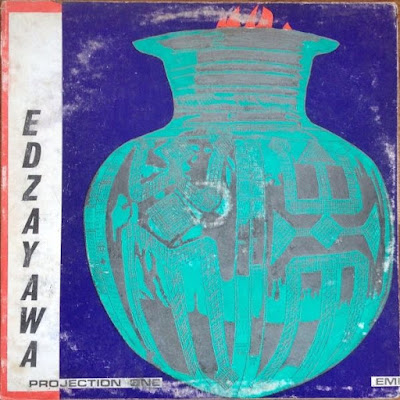 One of the best psychedelic rock albums i've ever heard, the african percussion makes it more enjoyable, lots of tempo changing and different rhythms match very well with the acid improvisations and the traditional african chanting makes it feel very ritualistic. Picturing the africa of the 70's and looking at this album only makes you think what talent and will power can do when you just want to achieve something great and these guys sound secure and totally determined to make their country rock hard, black people have had an undeniable and positive mark in rock music's history.

The quintet Edzayawa was formed in the late 60s by young Ghanaians, and launched a unique and rare album in 1973 in Nigeria, before discarding a few years later. It was re-released only in 2012, by Soundway.
The album One Projection brings a typical mix of funk rock with traces of West African music (afro rock), is composed of 8 tracks, with amazing organ and good touches of flute and percussion. Differs from most rock albums of the region at that time by not having fuzz guitar and many influences of psychedelic rock, plus some further elaborated songs and experimental/ instrumental compositions. Emphasis on the tracks  "Darkness", "Godzin", "Amanehun" and "Obuebee". Highly recommended for fans of african rock.