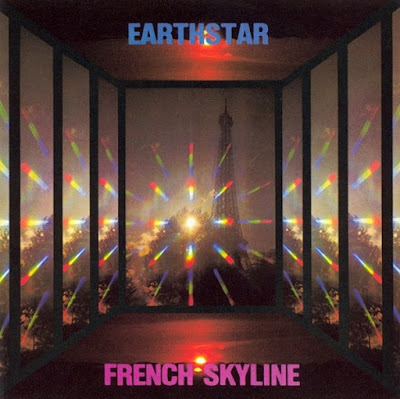 French Skyline was the second album by Earthstar. It was their first release for Sky Records and, more importantly, their first release after relocating to Germany at the invitation of Klaus Schulze. Schulze co-produced the album with Earthstar keyboardist/synthesist Craig Wuest. He also provided technical advice and programmed the synthesizers. Schulze's influence is much greater than that: he changed Earthstar's sound and his influence is greatly heard on this album.

Under Schulze's guidance Wuest and Earthstar created what some have called a "wall of sound": heavily multitracked and layered pieces so dense that it is often impossible to tell which instruments are playing. It's a rich, textural electronic sound that in many ways resembles Klaus Schulze's work more than other Earthstar albums, particularly on the two long pieces, "Latin Sirens Face the Wall" and "French Skyline Suite". The shorter piece sandwiched in the middle, "Splendored Skies and Angels" opens with the only discordant section of this album and is a bit harsh to my ears. The rest of the album flows beautifully and is an absolute pleasure for fans of '70s electronic music in general and Klaus Schulze in particular. It's an excellent album and it, by far, is Earthstar's most coherent in terms of sticking with one style.
Posted by Unknown at 8:51:00 AM