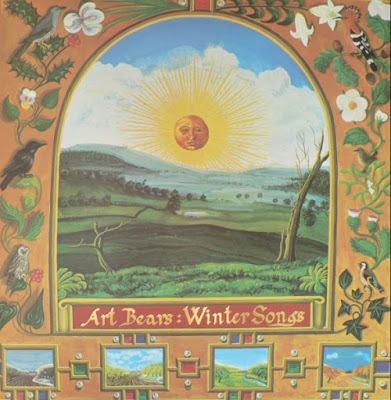 Art Bears' second album is their masterpiece, a beautifully focused and concentrated piece of work that was recorded in just 2 weeks. Amazingly, the music was all written during the recording period - Chris Cutler arrived with the texts, Fred Frith set them to music and the arrangements evolved in the studio. On this album there were no guest musicians, although special mention should be made of engineer Etienne Conod's contribution to their use of the studio as a compositional instrument.

Where their debut album explored several different themes, the lyrics for Winter Songs are informed mostly by Chris Cutler's fascination with the Middle Ages and are based on stone carvings in Amiens cathedral (except for two songs that refer to similar carvings in other cathedrals from the same era and area). The words are always poetic and sometimes oblique, although Cutler's political leanings can be inferred from Gold: "Owned men mined me/And out of their lives all my value derived/And out of their deaths/My authority". The music has some of folk influences first heard on 'Hopes and Fears' (Frith began his musical career in folk clubs and some of his solo albums feature his unique take on various folk traditions), but also ventures into dense, dark RIO style chamber rock and even into Residents- influenced studio wizardry. With Frith playing everything except drums, the arrangements are precise and uncluttered. Bass guitar is only heard on a few tracks, most notably on The Summer Wheel and 3 Figures, and like all the other elements in the sonic palette it is only used when necessary. There are some splendid passages featuring violin and piano, as well as Frith's ever inventive guitar. Chris Cutler's drumming is likewise a model of clarity and concision - rather than trying to fill all the available space, he knows when to drive the tempo forward, when to play softly to complement Frith or Dagmar and - most crucially - when not to play at all. Dagmar's interpretation of this material features some of her best vocal performances - The Hermit is sung with a clear, bell like tone, on The Skeleton she is at her most strident and the frantically uptempo Rats and Monkeys (a counterpart to the rock out on In Two Minds from Hopes and Fears) shows the uniqueness of her talent. A particularly powerful moment comes at the opening of First Things First, where the vocal is played backwards as an introduction to the song, mirroring the the theme of the lyrics (two dead trees pulling apart in opposite directions). Lyrics, melody, rhythm, arrangement and production are all informed by a singular vision, and there is nothing extraneous anywhere in these 12 songs.

Despite the possibly forbidding avant garde credentials of the writers and performers, this often a melodic and accessible album. Dagmar's voice is something of an acquired taste, but it is worth persevering with; few albums released under the 'rock' banner have such a coherent and fully realised artistic vision. This album is on a par with Robert Wyatt's Rock Bottom, Christian Vander's Wurdah Itah or Captain Beefheart's Lick My Decals Off, Baby. Uneasy listening, but highly rewarding and strongly recommended.
Posted by Unknown at 2:15:00 AM