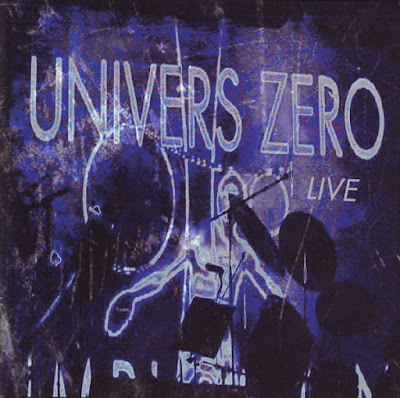 
If Univers Zero has reunited by the late 90s, they were mostly not a touring group. But for their recent studio album Implosion, Daniel Denis not only wrote one of his most groundbreaking and spellbinding albums, but also decided to take the group on the road.

With a fairly different line-up of musicians compared to the Implosion album (most notably the absence of long-time member Descheemaeker), Univers Zero is simply brilliant and the musicians are clearly on the best level.

Univers Zero has never been a group of histrionics and shredding solos, but rather an incredibly tight group where improvisation is not absent, but tightly controlled still, keeping things concise and the listener awake.

The set list presented here is of course partly re-presenting the full show, but the selection is widespread throughout their discography, having chosen to feature only two tracks from their latest album, although not the shortest ones. Of interest is Electronica Mambo Musette, which sounds anything but mambo, but rather borrows on improv some of Ravel’s bolero.

There are very few bands active today doing the neoclassical/chamber rock thing anywhere near as well as these guys. For fans of the new incarnation of Univers Zero, Live is a no-brainer. For those who still prefer the earlier material, this album presents the new stuff in the most favorite possible light.