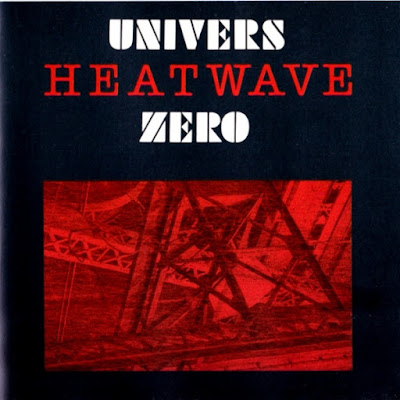 
The fifth Univers Zero studio album was to be the last for 13 years.

The album gets off to a strong start with the title track, composed by Andy Kirk. This is on a par with the best of early Univers Zero, and there is some excellent soprano sax from Dirk Descheemacker. Two shoter pieces follow, both composed by Daniel Denis. Chinavox is an effective piece of chamber rock which has the atmosphere of Univers Zero’s earlier work but which isn’t particularly memorable, while Bruit Dans Les Murs is a piece dominated by electric keyboards that actually sounds closer to Present or even Henry Cow on Western Culture. Denis’ drumming is outstanding on this track, and it points the way forward to his solo album Sirius and the Ghosts.

The second half of the album is taken up with the 20 minutes long The Funeral Plain, another Andy Kirk composition. There are some highly effective passages, and the use of synthesisers and electronic effects is an early foretaste of the kind of music that Univers Zero would create when they reconvened in the late 90s.