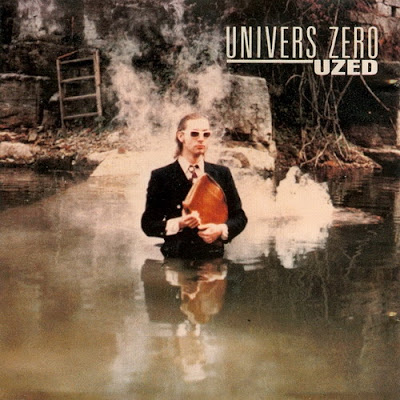 Uzed’s the cornerstone of Univers Zero’s career. Up to now, Univers Zero’s music had been mostly acoustic RIO, developing sinister moods and searching for human’s darker instincts. But with this album, Denis was to change considerably Univers Zero’s direction and this was due in no small part to the friendly competition he maintained with ex-Univers Zero Roger Trigaux, who had formed Present (with Denis holding the drum stool), and pushing each other to explore new musical territories. By now, Daniel Denis was the last remaining original member, Berckmans devoting his effort to Von Zamla. In comes future long time collab Dirk Descheemaeker on winds, Genet on bass and assorted string instruments, Plouvier (another future central figure) on keyboards and Mergen on cello and sax.

This album, as I said above, is the start of a new direction and can be easily seen as a blueprint for all their future album until Implosion. The music had now shifted from the sinister and macabre to the sombre and mysterious ambiances, the eastern influences being much more present (pardon the pun ;-), than previously. One of the most striking results is that the album is generally more melodious than the previous three, which often flirted with dissonance and atonal music. Here, the music has mystic and grandiose aspects not previously developed. The opener Présage is probably my favourite track as the mystery of the mid-eastern dawns (with the cello strongly inducing Arab ambiances) in a yet-asleep harem (see why I think this is their best track? ;-) and the first smell of Green tea as you are heading for the hamam with three beautiful creatures, and the clarinet providing the drama: this almost 10-min track is flawless. The manic Doctor Schwartz is a 100 mph nightmare with Plouvier’s piano providing the base for a haunting cello and clarinet. Wrapping up the first side of this wax slice, is Celeste (with two guest-musicians), a slow-developing almost 7-min track where the piano has the dominant role until the monstrous entrance of the “beast and Delory’s electric guitar (sometimes reminding you of Pinhas or Fripp) is clearly its angry scream. The only flaw I can think of is that the track ends in a fade-out.

Parade is probably where Miriodor took a good deal of their inspiration and the mad breaking noise are extremely disturbing, but the insane beat is not letting you off the hook. Centrepiece Emmanations is one stunning and most convincing track, where Univers Zero is simply taking on the role of a progressive giant group, but if it is not known widely among the progheads, it is mostly because this album was recorded in 1984. Had it been recorded a decade earlier, no doubt that this album would be standing with Magma’s 1001° Centigrade or Henry Cow’s Legend. Denis’s composing powers are simply impressive and his percussions are awesomely inventive, and the oppressive but enthralling ambiances make the almost 16-min track seem too short. In the closing section, the track diverges into electronic delirium, which some twenty years later, Denis will come back to and base his Implosion album around similar themes.

Clearly the album separating the two phases of Univers Zero, this album will serve as a template for Univers Zero albums for two decades to come (including Denis’s two solo albums).
Posted by Unknown at 9:12:00 PM