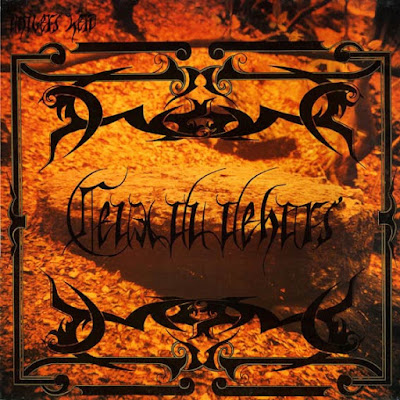 Third album from this stunning but sombre group and one of the highest rated from fans and often cited as THE album.

The 12-min+ Dense is a fiery “introduction” with Mellotrons layers underlined a strong harmonium, woodwinds and violin under the heavy duty Segers/Denis rhythm section. The middle section is rather quieter, but not any less worrisome, but Berckmans oboe draws wonders. Following this monster track is the no-less impressive (but very oppressive;-) La Corne, which is downright macabre with a few out of this world vocals and its church organ. We are definitely more in the classical music than in the rock spectrum with this track. Closing the first side is an almost danceable and considerably lighter Bonjour Chez Vous. Gothic is the word to describe this oeuvre.

The second side opens on the almost 13-min Kirk-penned Combat, with its war-like march beats, its calm before the battle, its battlesounds and full blown grandeur. “La Musique d’Erich Zann” is probably the oddest track on the album. It consists mostly of scraping and grinding noises that build up to a fever pitch, and then suddenly snap and return to their original quiet tone. “La Tete du Corbeau” is another quiet, brooding piece, but not nearly as “weird” as the previous track. A glorious first version of “Triomphe Des Mouches” makes the link with the following studio album.