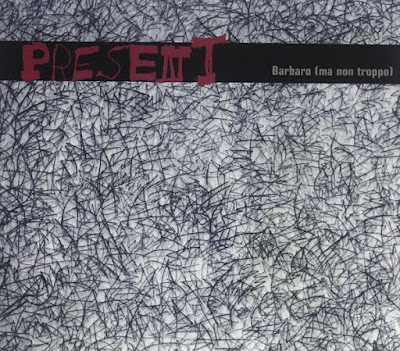 The band’s last studio album came in 2001, so expectations were naturally very high for this one. Present didn’t let us down, producing another masterpiece, which reminds us of their past glories, yet also focuses on the future with an even more intense, complex and better-sounding release.

The opener ”Vertiges” has an unrelenting tempo and some of the parts are incredibly complex. There are amazingly difficult segments that still contain so much anguish and other primal emotions. It is a tremendous achievement, showing off some of Present’s trademark aspects, but the piece also seems to have a more modern feel to it. There is an amazing intensity and rawness throughout it that keeps you on your toes all the way through.

“A Last Drop” is a piece composed by Pierre Chevalier. It’s his second contribution to the Present catalogue – the first being “Strychnine for Christmas” from the “High Infidelity” album. His style is quite different to Roger Trigaux’s. His piece is not that hectic and wild, there are a few more peaceful moments to rest your ears. Some segments on the Mellotron is reminiscent of early Crimson, while some guitar riffs of “Red”. It is a nice contrast to the damage on the senses that “Vertiges” inflicts on you.

The last title is a live cover of one of Univers Zero’s most recognisable works, “Jack the Ripper” (co-written by Daniel Denis and Roger Trigaux). It’s as if an extra surge of adrenaline has been put into the piece and “Jack the Ripper” has become even more brutal and manic. There are some added Mellotron and synthesiser parts, which add to the suspense, some of the instruments are different and the introduction is played on the piano instead of the harmonium.