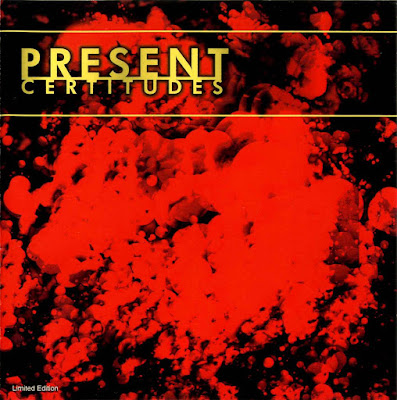 Present’s first full line-up studio album since their (so welcomed back) return is a rather superb one. Original members Roger Trigaux, Daniel Denis (both also Univers Zero members) and Alain Rochette return with long-time compadre Guy Segers on bass and Roger’s son Reginald on guitars.

The prominence of the vocals is noticable, as three of the four tracks have singing: while signing may be a bit an approximations for Present’s vocals here, we can talk more of chants or almost black-mass incantations – just simply dark, sombre and gloomy lyrics, fitting quite well the music.

“Delusions” will become a favourite in concert, with its never-ending piano riff repetition somehow bringing that minimalism that Present is always slightly hinting at, but here coming out in the open, but the last four minutes is a constant and awesome construction shifting constantly between odd time sigs and great soloing. “May Day” (in the help sense) is also another concert classic, yet another typical “Present” lenghty track.

“Sense Of Life”, have even better vocals and changing rhythm patterns and slight free jazz improvs. “Present” has definite touches of zeuhl music in them. They were always a very rhythmic group and Roger Trigaux’s constant switches from guitars to piano, this allows Rochette use a few keyboards extra including a rare mellotron, sparely used but to great effects. The last track is a self-not-so-explanatory and Rochette-penned Ex-Tango, which is another small gem.

Daniel Denis will not be around longer since he will reform Univers Zero again and Present will settle on a more permanent basis on Dave Kerman whom they toured with earlier.
Posted by Unknown at 12:13:00 PM